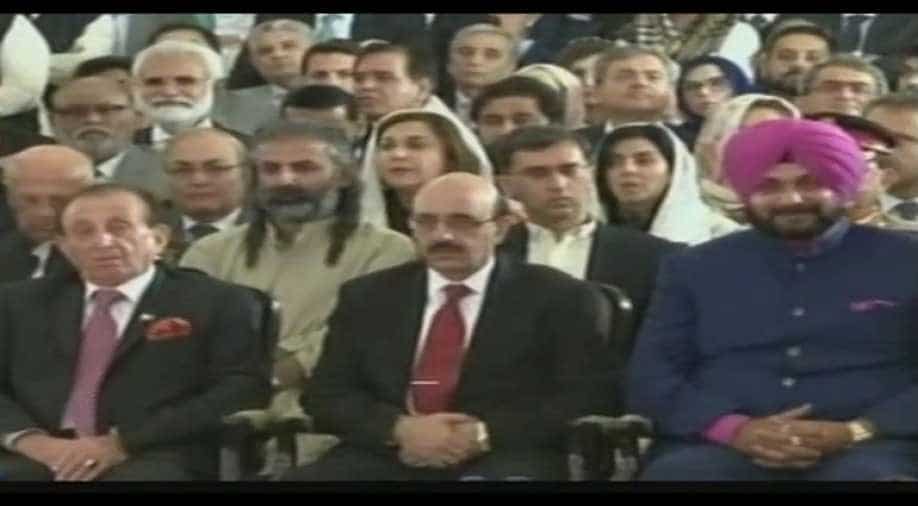 As Sidhu arrived for the event, he was welcomed by Pakistan Army Chief General Qamar Bajwa. He bore a pink turban with a blue suit.

The politician arrived in Lahore via the Wagah border on Friday from where he traveled to Islamabad.

Welcoming the "change" in Pakistan's democracy with the election of Khan as prime minister, he said Khan should come forward in peace initiative between the two neighbors.

He said he has brought "a message of love" to Pakistan as a goodwill ambassador of India.

"I have come here not as a politician but as a friend. I have come here to take part in the happiness of my friend (Imran)," he said, adding sportsmen and artistes help bringing the people of two sides closer.

"Hindustan jeevay, Pakistan jeevay," he chanted while reading a verse.

Cricketer-turned-politician and PTI chief Imran Khan on Saturday took oath as the 22nd prime minister of Pakistan, a day after he defeated Shahbaz Sharif in a one-sided contest in the National Assembly.

Imran Khan was administered his oath by President Mamnoon Hussain in Islamabad.

The ceremony commenced with Pakistan's national anthem, followed by recitation of verses from Quran.