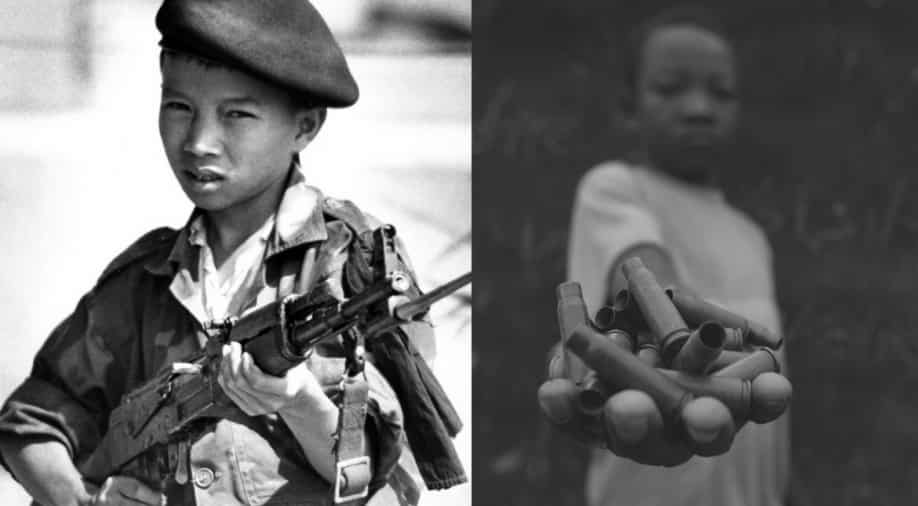 It was once believed that there are more child soldiers in Burma than any other country in the world (Representational Image: Left-Flickr Manhhai, Right-Pierre Holtz / UNICEF CAR) Photograph:( Others )

Myanmar's military has released 75 child soldiers, a UN agency said, its first discharge this year as part of a gradual process to end decades of forced recruitment of underage fighters.

There are no concrete figures on how many children are still among the estimated 500,000 troops that serve in Myanmar's military, or the ethnic rebel armies that it battles in the country's border regions.

The state's army -- also referred to as the "Tatmadaw" -- has released 924 children and young people from its ranks since signing a deal with the United Nations in 2012, according to Friday's statement released by UN child protection agency UNICEF.

The child soldiers released will have to attend reintegration programmes to return them to civilian life, a process that will contribute to "bringing lasting peace in Myanmar as productive citizens", the statement added.

Friday's ceremony was attended by the discharged children and young people, with the youngest ex-soldier being 14 years old.

UN Myanmar resident coordinator Knut Ostby said in a speech during the ceremony that it is much more difficult to recruit a child today than before the 2012 pact was signed.

But more could be done to ensure the safety of children and young people in Myanmar, he said, calling out the Tatmadaw for "not having put in place measures for protection of children with regards to killing and maiming, and rape and other forms of sexual violence."

Ostby on Saturday recounted to AFP scenes of joy from the children and their families during the ceremony.

"The children and youth and their families were clapping, they were so happy that this was happening. These are (children) who are going back to their normal lives," he said.

"The context is challenging but there has been considerable progress in stopping underage recruitment and discharge of child soldiers."

Experts say that as long as the army and ethnic armed groups continue warring within Myanmar, children remain at risk of recruitment.

They are usually kidnapped or taken by force from public spaces like parks and train stations before being threatened with jail time if they refuse to be conscripted.

Myanmar UNICEF representative June Kunugi told AFP that there are also many who are pushed to join the Tatmadaw because of extreme poverty, lack of access to education and livelihood opportunities.

"It is important to note that the recruitment and use of children by armed forces or armed groups is considered a grave violation of children's rights regardless of the child's perceived willingness," she said.

UNICEF said in addition to the army there are seven other "persistent perpetrators" that recruit child soldiers, including the Kachin Independence Army and the Shan State Army South -- both ethnic groups that continue to engage in skirmishes with the Myanmar military.