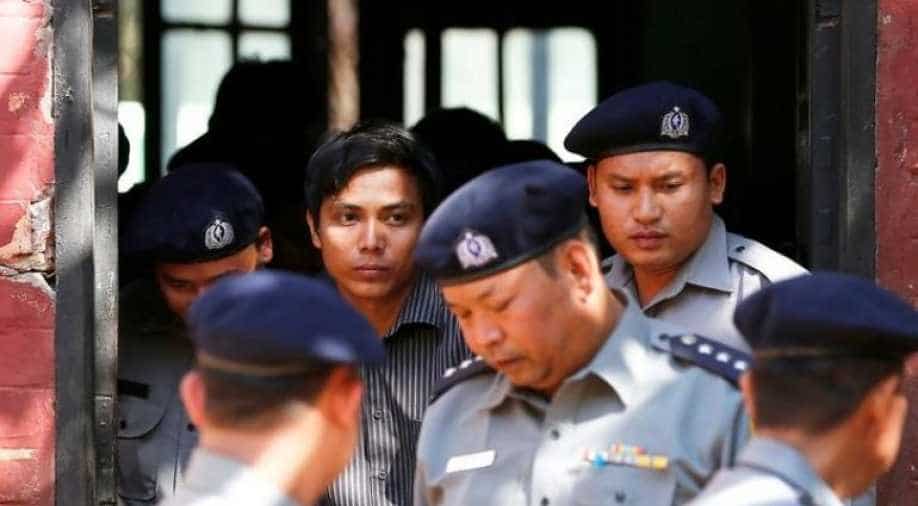 During previous hearings, one of the police witnesses told the court he had burned his notes made at the time of the arrests

Prosecutors and defence lawyers will present arguments on Monday whether two Reuters reporters accused of obtaining secret documents in Myanmar should be charged, after the six-month pre-trial phase of the landmark case ended last month.

After hearing the arguments, the court in Yangon will rule on whether Wa Lone, 32, and Kyaw Soe Oo, 28, will be charged under the colonial-era Official Secrets Act, which carries a maximum penalty of 14 years in prison.

The decision is likely later in July, legal experts say.

The pre-trial hearings, which began in January, finished last month. The two reporters have been denied bail and have been held in Yangon's Insein jail since being arrested in December.

Throughout, the defence has said the prosecution has failed to establish how the alleged documents had come into the reporters' possession.

"In the law, in the Official Secrets Act, it is said that these documents, those official secret documents, must be obtained," Khin Maung Zaw said in a June 18 hearing. "They cannot prove that they were obtained."

The defence has also said prosecutors failed to show how the reporters posed a threat to national security or name the "enemy" they were allegedly aiming to support. In addition, they have argued that the information included in the documents had already been made public and therefore was not secret.

During previous hearings, one of the police witnesses told the court he had burned his notes made at the time of the arrests. A civilian witness had the location where police say the arrests was made - which emerged as a key point of contention during the proceedings - written on his hand.

Lead prosecutor Kyaw Min Aung, arguing in April against the dismissal of the case, said the documents the reporters had in their possession were secret and that the court could assume they intended to harm the security of the country.

In his ruling at the time, Judge Ye Lwin said there was "a proper reason" for the accusations against the two reporters and therefore "they should not be released."

Myanmar government spokesman Zaw Htay has declined to comment throughout the proceedings, saying Myanmar courts were independent and the case will be conducted according to the law.

At the time of their arrest in December, the reporters had been working on an investigation into the killing of 10 Rohingya Muslim men and boys in a village in western Myanmar's Rakhine State. The killings took place during a military crackdown that UN agencies say sent more than 700,000 people fleeing to Bangladesh.

The reporters have told relatives they were arrested almost immediately after being handed some rolled up papers at a restaurant in northern Yangon by two policemen they had not met before.

In April, Police Captain Moe Yan Naing testified that a senior officer had ordered his subordinates to plant secret documents on Wa Lone to "trap" the reporter.

After his court appearance, Moe Yan Naing was sentenced to a year in jail for violating police discipline and his family was evicted from police housing. Police have said the eviction and his sentencing were not related to his testimony.

Senior police officials have dismissed the testimony as untruthful.

Writers, press freedom and human rights activists around the world have rallied on behalf of the imprisoned reporters, with the United Nations and several Western countries calling for their release.