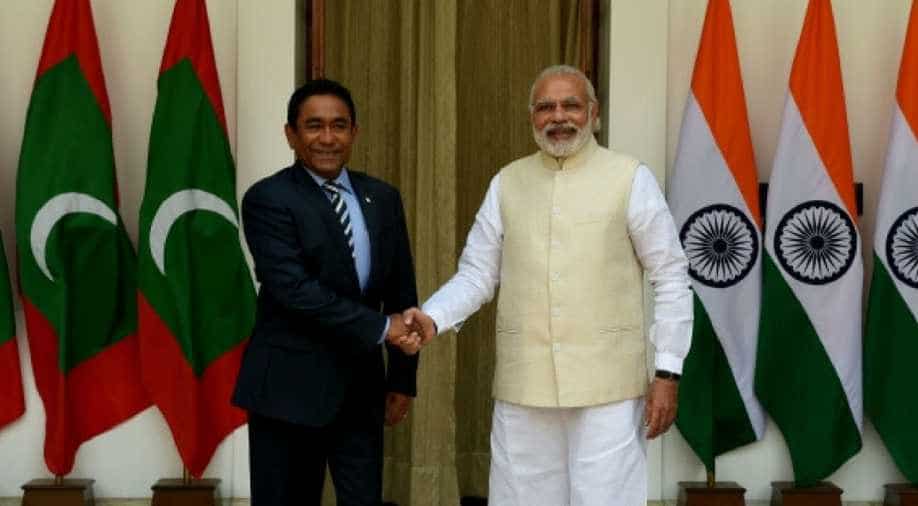 India, Maldives ties nosedived after India opposed the imposition of Emergency in the country.

As a result of months of talks between the Maldives and India, the island country has decided to keep two military helicopters gifted by the Indian government, news agency PTI reported.

According to reports, the Maldives was not willing to keep the helicopters, a 48-member crew and support staff but later agreed to keep retain them.

The Maldives' ambassador in India, Ahmed Mohamed, told Reuters that two military helicopters provided by India were mainly used for medical evacuations but were no longer required as the islands had built up enough resources of its own.

"They were very useful in the past but with the development of adequate infrastructure, facilities and resources we are now in a position to handle medical evacuations on our own," he said.

India, Maldives ties nosedived after India opposed the imposition of Emergency in the country.

Last month, India expressed concern over the announcement of the elections without allowing democratic institutions, including Parliament and the judiciary, to work in a free and transparent manner.

India stated it wanted "credible restoration" of the political process and the rule of law in the island nation before the elections were conducted.

However, tensions seemed to ease off with reports of the Maldives extending visas of the Indian team comprising personnel from the Indian Navy, Coast Guard and support staff from Hindustan Aeronautics Ltd (HAL), the manufacturer of the choppers.

The development comes less than a month before the presidential election in the Maldives which are due on September 23.

The Maldives is strategically located in the Indian Ocean and is an important neighbour for India. Both the countries, over several years, are known to have made efforts to enhance defence and security cooperation, particularly in the maritime sphere.

As part of its naval diplomacy, India has been providing helicopters, patrol boats and satellite assistance to countries such as the Maldives to retain influence in the Indian Ocean.

However, China has been slowly making inroads into that arena, building ports and roads backed by loans. The Maldives has also given the Chinese a few islands to develop, Reuters reported.