Lessons of protest: From Tahrir Square to Raisina Hill to Marina Beach 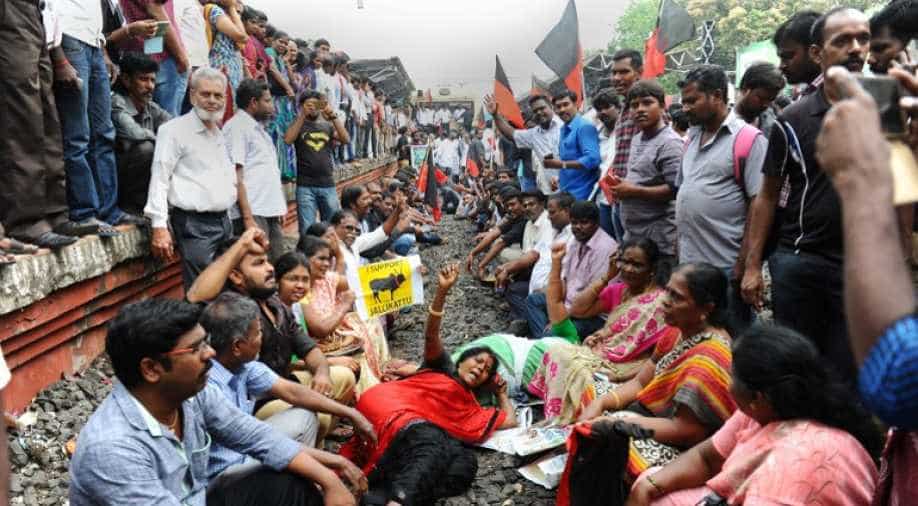 Opposition Dravida Munnetra Kazhagham block railway tracks during a demonstration against the ban on the Jallikattu. Photograph:( AFP )

The ability to organise a spontaneous protest has become easier and less expensive with the explosion of social media. Mobile phones transmit news quickly and, thus, often acts as an instrument of radical disruptor. These slim hand-held gadgets allow both opinion and action on the ground to be organised quickly. By allowing immediate two-way communication between individuals and masses, social media overrides the government and the main-stream media to reach the people. But despite such huge possibilities, popular protests in recent times have demonstrated that unless it manages to impact civil society deeply, gains can be ephemeral.

Globally, all the popular protests in the last 10 years have been leaderless, spontaneous and demanded immediate structural changes. But if one looks back, the change which was sought was either lost or failed to alter the current character of the state itself.

Jallikattu is one such example in India as had been the movement for Lok Pal bill and protest around ‘Nirbhaya’ gang rape case. The best examples from abroad would be protests in Tunisia and Egypt. We will analyse the above-mentioned cases one by one and cross evaluate them against Gandhi’s movement in colonial India.

The fact that all recent popular movements in India showed distrust towards politicians, sought to establish a cleaner political process and demanded a powerful bureaucracy reflects a disconnect between the people and politicians. The movements also witnessed a simplistic reinvention of Gandhi as the brand of protest, rather than form and practice of it.

The movements also witnessed a simplistic reinvention of Gandhi as the brand of protest, rather than form and practice of it.

Movements that developed at places, such as Marina beach, Raisina Hill or Ram Lila maidan, all of them wanted justice through immediate legislative action without legal scrutiny. In the case of Marina, ordinance came into existence, in the Nirbhaya case, the UPA government appointed a committee to tighten rape laws and the Ram Lila protest led to the birth of the Lok Pal bill, which till today has not been instituted. In the case of Jallikattu, justice by the Supreme Court is awaited.

Sparked by specific events, all three protests meant something significant for an average citizen. The question to be asked is whether rape or corruption cases have gone down because of the protest or has Jallikattu ordinance been able to solve daily problems for the people of Tamil Nadu. The answer in all these cases is, no.

In all the three cases none of the objectives have been achieved. The only thing which became visible after a point of time was that state lost its appetite for engagement, leading to either violence from the police or the protestor.

Even Tahrir and Tunisia failed to change the complexion of the current state in both countries. The repressive regime continues till today despite an electoral process in place. The valuable lesson forgotten in both the cases has been that democracy doesn’t end with elections, it begins with the conclusion of the counting process.

No one has given a thought as to why, despite the democratic and non-violent nature of the protests, the movements failed at the basic level. All of them became a talking point rather than the points of departure for new forms of practice related to everyday life.

The valuable lesson forgotten in both the cases has been that democracy doesn’t end with elections, it begins with the conclusion of the counting process

The Gandhian form of protest was both a ritual and the symbol of transforming the self and the collective with a sense of responsibility. It was a process of individual cleansing by being responsible for a political act committed within defined goals and art of practice.

It is because of this commitment, Gandhi called off the Non-cooperation movement after the Chauri Chaura incident wherein a police station was burnt by the protesters. Gandhi was blamed by his colleagues, including Nehru for giving more importance to the means than the end. His answer was that means can define the end, and that is why India was able to escape the vicious circle of violence which other colonial nations witnessed.

Gandhi was able to define the time limit of the protests. None of his protests were endless. What became endless was self-flagellation through fast which he resorted to enforce moral compass on his party and the nascent state so that politics worked within ethical confines.

The techniques of protest can be powerful and empowering but can be bereft of ethical and moral obligation. Often information and news can transgress the sense of responsibility by prodding the whole community to decide what is correct through taking the law as a hostage.

As it has been rightly pointed out, public opinion should and must enforce upon legislative process but should it impinge on legal scrutiny?

A non-violent protest doesn’t necessarily mean a Gandhian way of protest. The Gandhian protest was defined by the means, and restored respect to the ideals of democracy and democratic agents within his moral framework. Today’s protests have distinctively acquired a tilt against democratic process itself. Therefore, it becomes incumbent on the politicians to make democracy and politics a good word rather than encourage protest to become a tool of mere outrage to be consumed by vested interests silently.

This is the challenge in front of the political establishment. Politicians want to use the social media without the understanding that it doesn’t come with a moral comprehension which can only be provided by agents of the democratic state alone.