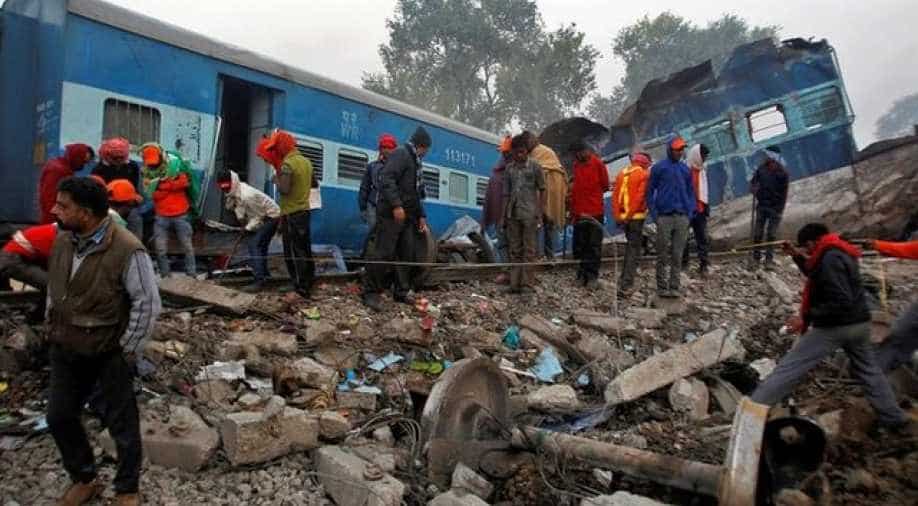 Rescue workers search for survivors at the site a day after the crash. Photograph:( Reuters )

Sunday's (November 20) derailment was India's deadliest train crash since 2010 and has renewed concern about the poor safety standard of the state-run network, which is a lifeline for millions of Indians but has suffered from chronic underinvestment.

The train, which was travelling between Patna and Indore, had suddenly rolled off the tracks in Pukhrayan, 65 km south of Kanpur city in the early hours of Sunday, when most of the 500 passengers on board were asleep.

"In the wake of unfortunate and tragic accident at Pokhriyan near Kanpur of Indore-Patna Express, railway administration has taken some action. The Divisional Railway Manager of Jhansi division has been transferred from Jhansi to Ranchi. And in addition five officers of Jhansi division have been placed on suspension," said Anil Saxena, Chief Public Relations Officer of Indian Railways, in New Delhi.

Railway Minister Suresh Prabhu had assured the guilty will be punished and thorough investigation will be carried out.

A First Information Report was also filed against unknown persons under various sections of the Indian Penal Code after the disaster.

A temporary speed limit of 20km/hr has been set.

The largely colonial-era system, the world's fourth largest, carries about 23 million people every day. But it is saturated and ageing badly. Average speeds top just 50 km/h and train accidents are common.

The death toll from India's worst train accident in six years reached 150 Tuesday, while 200 others who were injured are currently getting medical attention at different hospitals, according to the local authorities