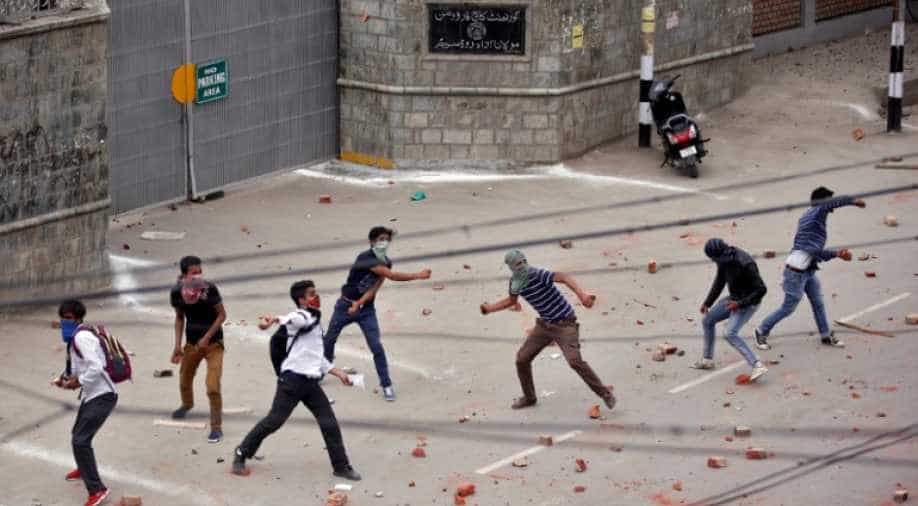 Demonstrators throw stones towards the Indian police during a protest in Srinagar on May 9. Photograph:( Reuters )

On April 17, following widespread student demonstrations, the Indian government blocked access to 22 websites and social media applications ||The UN experts said the ban violated the fundamental rights of the freedom and expression of citizens

Two United Nations human rights experts have called upon India to end the ban on social media networks and mobile internet services in Jammu and Kashmir, saying that they violate the fundamental rights of the freedom and expression of citizens.

“The internet and telecommunications bans have the character of collective punishment [and] fail to meet the standards required under international human rights law to limit freedom of expression,” said David Kaye.

Schools and colleges at some places in the Valley, which had been temporarily shut, have been re-opened so that the academic activities of the students do not suffer.

The experts called upon the government to seek a solution for the social and political conflicts of the region through "an open, transparent and democratic dialogue".

The news release also noted that there have been around 31 reported cases of social media and internet bans in the Indian state since 2012 and such developments seemed to be a worrying pattern aimed at curbing protests and social unrest in the region.

Violence in the northern Indian state have intensified since July, after the killing of popular underground militant, Burhan Wani, by security forces.

Tensions between India and Pakistan, who India accuses of instigating violence in the state, have also increased after repeated ceasefire violations by Pakistan.

The Indian Army, meanwhile, has decided to re-introduce cordon and search operations (CASO) as a "permanent feature" of its campaign against militants, PTI reported.

The army is reintroducing the practice nearly 15 years after it was abandoned after the recent killing of a young and unarmed Kashmiri Army officer Lieutenant Ummer Fayaz in Shopian by suspected militants.

The Army had discontinued CASO following opposition from the local population and after 2001 launched cordon and search operations only on specific intelligence-based inputs.