Is Nagrota the last to be attacked? 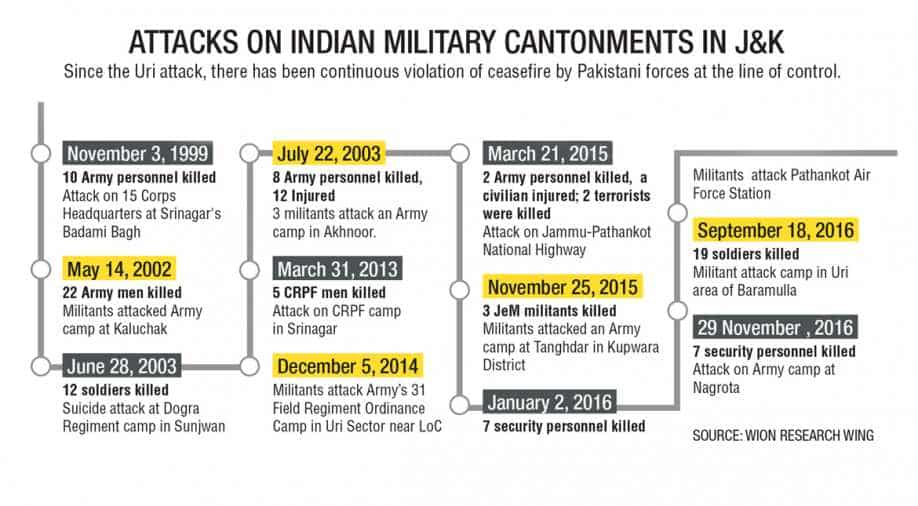 At least 89 Indian military personnel have been killed in Kashmir in 2016. Many children have lost a parent. Many women have lost their husbands and parents their young son while he was defending the country. But the thing that is insulting to hear for military personnel from civilians is that the Army does not know how to protect the cantonment. And some smart journalists give opinions on how cantonments need to be guarded better.

The Army encampments were built a long time ago. In the last half century, several cities have been built around these garrisons but the growth has been disorganised in terms of infrastructure, city planning as well as the exponential population growth. Defence cantonments and Lutyen’s Delhi are the only forms of what can be called an organised city. With the cities being so close to the garrisons, it means that the populations have been virtually exposed to the attacks — military and terrorist. At some places, the civilian establishments are so close that it is impossible to shield them from the skirmishes.

Let’s take the example of Meerut. A few years ago, the security situation in the city had deteriorated. The Commanding General decided to stop the civilian traffic from going into the army cantonment without proper verification. The city of Meerut came to a standstill. The situation deteriorated so much that the civil administration and the Army held meetings to resolve the situation.

There are approximately 50 such cantonments in India which are in a similar situation. Some of the big ones are Kanpur, Allahabad, Agra, Varanasi, Bangalore, Nasik and Pune to name a few. If the Indian Army is expected to handle a harsh perimeter protection, then it needs greater ability to clean out the illegal development that has taken place around cantonments. If the cantonments are not isolated from civilian infrastructure, the civilians are at risk as it becomes difficult to contain multi-pronged infiltration attacks.

In 2003, India and Pakistan agreed on a ceasefire agreement to restore peace and enable a positive and productive diplomatic way as the forward between the two nations. However, since then, there have been several instances where this agreement has been violated by the Pakistani forces. Several Indian army personnel, as well as civilians, have been killed and injured due to such violations. The breaking point was the 26/11 attack in Mumbai where the evidence points to the fact that members of Pakistan’s intelligence were involved in the gruesome attack. However, at that time, India chose to take the legal and diplomatic route to identify the perpetrators and eventually punish those guilty instead of going into a war against Pakistan.

Instead of backing off, over the years the ceasefire violations have continued from the Pakistani side either by Pakistani forces, terrorist groups backed by the Pakistani forces or other skirmishes. On September 18, 2016, India experienced one of the most deadliest attacks on its security forces. It is suspected that the attack involved the militant group, Jaish-e-Mohammed. During the attack, 85 civilians and 18 soldiers were killed. The attack again put the Indian government in a dilemma regarding its response towards its western neighbour on whether it should attack or again take the diplomatic route. This time there was mounting pressure from the Indian media, asking the government to take some significant action. The Indian government responded to its dilemma by conducting a surgical strike against Pakistan.

But, the cross-border ceasefire violations have not ended. The western flank of India still continues to reel under attacks from Pakistan (either Army or militant groups), killing and injuring several Indian Army personnel with the most recent, being the attack on Nagrota-based 16 Corps headquarters on the outskirts of Jammu city, reportedly killing two soldiers. Will these attacks ever end?

Many have appreciated the fact that there has been no major breach in the US after 9/11. But that has been possible only because the US has a border that is not exposed. Also, its intelligence unit has been at the top of its game to be able to block any big action on the surface. This is despite the availability of easy access to large weaponry to the US citizens. But India cannot protect its borders the way the US can. This is primarily because of the physical boundaries that India shares. We have a land border of 15,000 km that we share with 6 countries — Bangladesh, China, Pakistan, Nepal, Myanmar, and Bhutan. We also have a coastline of 7,516.6 km.

It won’t be possible to have a harshly closed border. But what is essential, is the ability to incisively act if Indian territory is violated. Also, India requires a better intelligence network, including both human intelligence and technical eavesdropping. The armchair strategists need to stop blaming the military for exposing itself and instead, suggest measures for addressing the issues that the Army is facing.

How coronavirus outbreak is impacting the gaming industry

India has played a vital role in the fight against coronavirus