Is it bad news for the Himalayan glaciers? 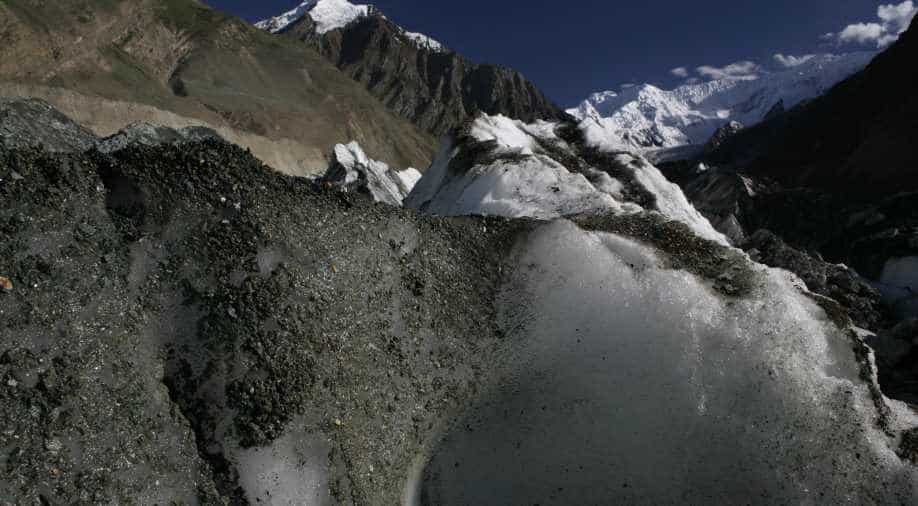 Dust is one of the chief factors contributing towards melting of South Asian glaciers Photograph:(Getty)
Follow Us

Environmentalists have long been worried about melting glaciers in the Himalayas. Studies and articles on the matter often border on the extreme. Some seek to reassure people that it is not a big deal, while others paint doomsday scenarios. But while global warming is a reality, available facts and figures are not enough to ascertain exactly how frozen surfaces in the region are melting or what its impact is on the environment, vegetation or animal life.

The Himalayan range and its extension in the northwest are home to more than 50,000 glaciers. Only the polar circles have more. Approximately 60,000 square kilometres of ice are stored along the Hindu Kush-Karakoram-Himalaya mountain ranges. But despite the huge dimensions, these frozen masses do not last for ever and have retreated in the last few decades. Glaciers are fragile. After all, they consist of nothing but ice.

Global warming has led to the Himalayan range witnessing less snowfall, more rains and hotter summers. Glaciers erode and become shorter and thinner every year, a loss that is impossible to recover as long as the mercury continues to rise.

Fieldwork is a major problem here. Many of the glaciers are located in isolated high mountain areas and reaching these places with necessary equipment involves a lot of time and money. In some areas of Afghanistan, it is also a matter of safety. Data are fragmented and it is impossible to have a precise overall picture.

Some glaciers have visibly receded, like the Gangotri, in India, where the Ganges has its headwaters. From 2000 onwards, it has been receding to the tune of 12 metres every year. It has already lost nearly 200 metres of its length.

But not all South Asian glaciers are melting though. The process seems to have been reversed in the Karakoram range, along the border between Pakistan, India and China. The monsoon reaches this region in winter and the precipitation freezes thanks to severe temperatures.

When it comes to South Asian glaciers, one of the chief factors contributing towards their melting is dust. A part of it comes from forest fires, cooking fires, agricultural and industrial burn wastes.

It is not good news though and it does not balance the loss. "It is more of a unique phenomenon. There are very few other places in the world where this is happening," says Sarah Kapnick, a physical scientist at Princeton University who studies the area closely. "We can create a hypothesis that may be valid for the next hundred years. It is impossible to know what could happen after that. And this does not mean that it is not getting warmer up there. It sounds counterintuitive. But more snow means more precipitation which is another effect of rising temperatures," the scientist tells WION.

It is almost unanimously recognised that global warming is a human-induced phenomenon, mostly caused by increasing concentrations of greenhouse gases. But when it comes to South Asian glaciers, one of the chief factors contributing towards their melting is dust. A part of it comes from forest fires, cooking fires, agricultural and industrial burn wastes. Particles get deposited on the frozen surface, absorb the sun light, warm up and create holes, pretty much what happens when a firebrand is placed on an ice cube. Through these holes, solar heat gets the chance to penetrate deep in. The melting gathers speed.

Most of this dust has natural origins: it comes from the Asian Brown Cloud (ABC), a recurring layer of pollution partially covering South Asian skies.

"Poor quality petrol combustion also contributes to this cloud but it is mainly composed of natural dust coming from Rajasthan and other dry places in India and Pakistan which gets blown by the wind," says Dipak Gyawali, director of Nepal Water Conservation Foundation (NWCF) and a former Nepalese minister for water resources. "There is not much that we can do about the natural part of it. We can surely work on cutting down on the use of poor quality petrol and coal to reduce the damage," he adds.

Glaciers are, above all, storage systems. They thicken with winter snowfalls and release water when the summer comes. "Most of the high altitude settlements rely on spring sources for their water. This is true for Nepal. The shrinking of glaciers will not cause them problems. It will mostly affect low altitude areas, reducing the flow of rivers during dry seasons," the director of NWCF puts the elements into perspective.

Monsoons remain the principal source of fresh water in South Asia but the flows of some of the biggest rivers in the region depend on ice melt. The Indus in Pakistan, for example, relies on glaciers for up to forty per cent of its flow. But a dense network of minor rivers and major ones across the Indo-Gangetic plain mitigates the reduction in ice melt. The network continues to support agriculture and ensures the survival of hundreds of millions of lives.

Rice is the main agricultural product of the region and it is a water-intensive crop. According to the International Rice Research Institute (IRRI), paddy grows on 60 million hectares of land in South Asia. Accounting for more than a quarter of the global production, Bangladesh and India take the lead. Any change in the rivers’ flows will have a severe impact.

Glaciers are a hot topic. There is too much hype. For instance, you say that if glaciers melt, Bangladesh will be completely flooded. You immediately grab eyeballs. But it is scientific nonsense.

Sifting through the jungle of articles, videos and infographics on the matter, one encounters contradictory figures. One moment, it seems that South Asian glaciers will disappear in two decades and there will be huge floods followed by terrible droughts. The next moment, one encounters data that points to their good health. This is confusing and undermines the credibility of the scientific community.

"See, glaciers are a hot topic. There is too much hype. For instance, you say that if glaciers melt, Bangladesh will be completely flooded. You immediately grab eyeballs. But it is scientific nonsense. You are saying a wrong thing. Floods occur because of massive monsoon rains and the problem is that no one can ever predict the right amount of precipitation. Water warming is a much bigger problem and nobody is talking about it," comments Dipak Gyawali.

"It is always difficult to speak about environmental problems with a non-specialist. It is also challenging because what will happen in the future is pretty much uncertain. Climatic conditions change in decades and some of these are natural. As scientists, we are not always good at explaining this to common people," opines Sarak Kapnick.

A balanced narrative will improve general awareness about the negative effects of global warming. Water, in all its forms, is a basic need of any ecosystem and its preservation is a priority. It is the common interest of the world.

South Asian rivers are also an important source of clean energy. Some countries base their energy provision on hydropower. It powers more than sixty per cent households in Bhutan.

A decline in river flow leads to a decrease of potential energy. In a developing region like South Asia, this may also have political ramifications. It may force countries to further tighten their borders. A run for energy in such a scenario will affect peaceful and constructive coexistence.

But global warming also presents a unique opportunity for South Asian governments to come together to battle the problem. They can coordinate their actions and benefit from each other’s respective strengths. Rivers and glaciers are often shared between neighbouring countries and change in one place will affect people in another. Any negative changing will affect all their populations. Pakistan, for instance, can face water and hydropower shortage if Indian glaciers melt too fast. The necessity of a common strategy to preserve water sources may become a way to mend poor diplomatic relations between some South Asian countries. In case they succeed, the region can gain a global leadership role in environmental protection. It is a chance not to be underestimated and a cause not worth neglecting.

Talks with Taliban an incredibly complicated negotiation: US Secretary of State Pompeo