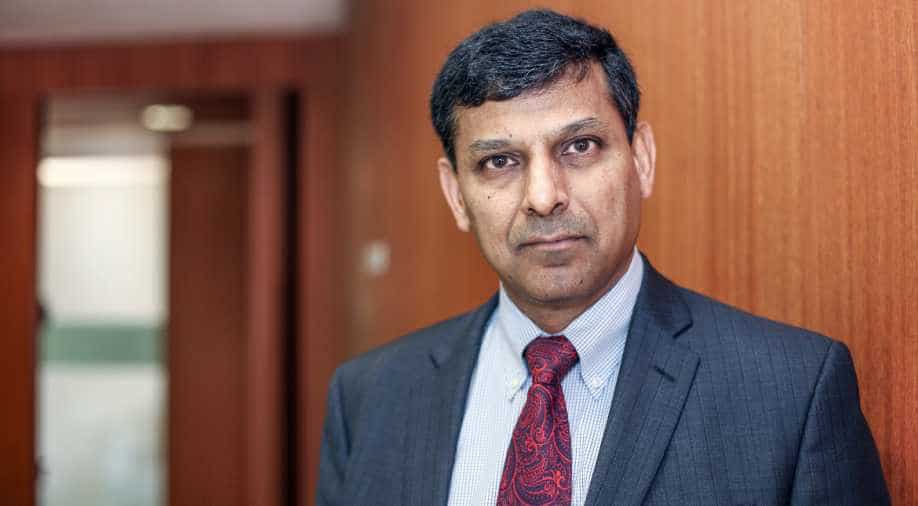 Rajan also raised concerns about employment generation, saying India's 7.5 per cent growth will not be able create good jobs for the 12 million people coming into the labour market every year. Photograph:( Getty )

Follow Us
Investors in India are on the edge as local media report that Prime Minister Narendra Modi could select the new governor of the Reserve Bank of India (RBI), to replace "rock star" incumbent Raghuram Rajan, as early as this week.

In making his selection, Modi will need to juggle competing demands from within his own party, the economy's need for more stimulus and investors' demands for an independent thinker.

Here is some background on the candidates seen as potential successors to Rajan at RBI, India's central bank.

Panagariya, 63, is currently the vice-chairman of NITI (National Institution for Transforming India) Aayog, a policy commission. Headed by the Prime Minister, it's a substitute for the previous Soviet-style Planning Commission and is designed to function as a think-tank and policy forum.

A free-market economist, he is an advocate of growth-supportive policies. He was one of the most vocal supporters of Modi's 'Gujarat model of growth'. He has authored several books, including "Why Growth Matters", which examines how market-driven economic growth is vital to reduce poverty.

The former chief economist of the Asian Development Bank was one of the architects of the labour reforms in Rajasthan that made it easier for companies to hire and fire workers.

In the past, Panagariya supported loosening of fiscal deficit targets to create space for more capital spending.

His speciality is on trade, and as the country's negotiator at Group of 20 gatherings, he has criticised China's massive Yuan devaluation and has also argued that India's relatively less-weaker currency is hurting its exports.

In terms of monetary policy, Panagariya, with a doctorate in economics from Princeton University, has been a proponent of setting a higher consumer inflation target than 4 per cent, which at present, is set between 2 per cent and 6 per cent. That could raise expectations that he would be more willing to ease policy.

???One of the four RBI deputy governors, Patel, 52, was reappointed in January for another three years. He has run the central bank's monetary policy department since 2013 and is viewed as a leading contender for the governor's job.

Seen as a close lieutenant to Rajan, Patel headed a committee that introduced landmark changes, including a switch to inflation-targeting and adopting consumer prices as the new benchmark instead of wholesale prices. The changes he helped drive are considered to be among the most significant monetary policy reforms since India opened up its economy in 1991.

Patel, whose remit at the RBI included managing money markets, has faced criticism from market participants, however, with some traders and bankers complaining that he kept liquidity tight at a time when the RBI was lowering rates, starving banks of cash.

Patel, according to a Nomura note, is considered a 'hawk' on his monetary policy stance.

Mohan, 68, had two stints as a deputy governor of the RBI. He also served as secretary at the department of economic affairs at the finance ministry and held positions at the International Monetary Fund (IMF).

Mohan was in charge of monetary policy, financial markets, economic research and statistics at the RBI.

Nomura pegs Mohan as neutral in his monetary policy stance. The brokerage firm noted that in a working paper that he co-authored last year, Mohan stated that achieving 8-9 per cent economic growth would need the maintenance of appropriate rates, a realistic and competitive real exchange rate and a focused attention on removing land and labour related impediments.

Gokarn, 56, also a former deputy RBI governor, currently serves as an executive director at  IMF. He looked after monetary policy during his three years at the central bank until the end of 2012.

During his tenure as deputy governor, Gokarn zoned in on the lesser noticed higher protein consumption driven inflation, which was a reason for the wholesale price inflation (WPI) index pushing higher at the time. He also laid greater stress on core WPI, essentially demand-led inflation.

Nomura said it views Gokarn as "balanced in his views" and as having a neutral stance on monetary policy matters.

A high-profile banker, Bhattacharya has been at the helm of India's largest lender - State Bank of India - since late 2013 and has earned praise from investors for her management of the bank's mountain of bad debt. She was named in the Forbes list of the world's 100 most powerful women.

Bhattacharya, 60, whose term as the chair at State Bank of India ends later this year, is perceived as another front-runner in the race.

She was reportedly among the candidates interviewed to head India's capital markets regulator before the government made a last-minute decision to extend the term of the incumbent. She has spent her entire career in the banking sector and never held any policy roles.

Given "her bias toward the banking sector", Nomura said it sees Bhattacharya as a "more dovish candidate."