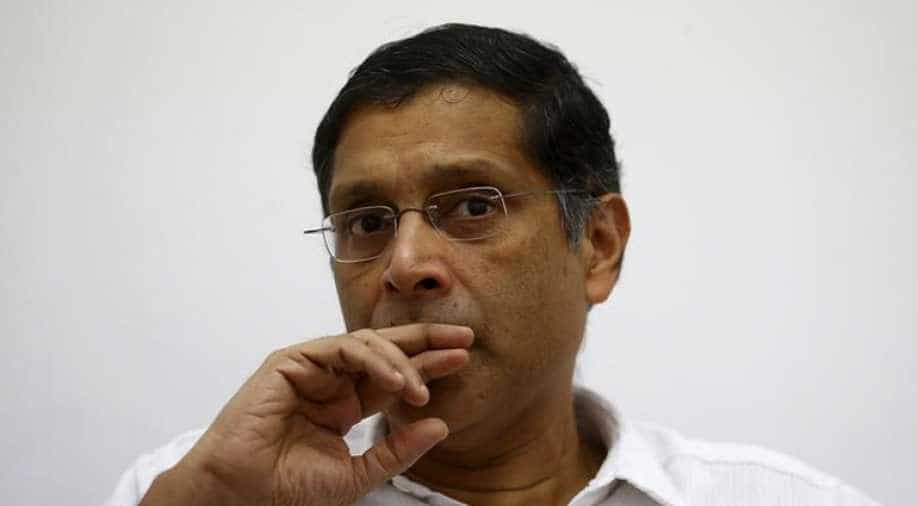 Arvind Subramanian said ratings agencies should not be taken seriously at all. Photograph:( Reuters )

Arvind Subramanian questioned why rating agencies had maintained India's BBB- rating despite clear improvements in economic fundamentals ||He said China's rating had been upgraded to AA-, even though its fundamentals had deteriorated

India has been placed in the lowest investment grade by these agencies which leads to higher cost of borrowing in the global markets due to investor risk perceptions associated with it.

"In recent years, rating agencies have maintained India's BBB- rating, notwithstanding clear improvements in our economic fundamentals (such as inflation, growth, and current account performance). At the same time, China's rating has actually been upgraded to AA-, even though its fundamentals have deteriorated," he said here.

"In other words, the ratings agencies have been inconsistent in their treatment of China and India. Given this record - what we call Poor Standards -- my question is: why do we take these rating analysts seriously at all?," he said.

Citing the example of the sub-prime crisis, he said questions were raised about their role in certifying as AAA bundles of mortgage-backed securities that had toxic underlying assets in the US financial crisis of 2008.

Similarly, their value has been questioned in light of their failure to provide warnings in advance of financial crises, he said. Delivering VKRV Memorial Lecture, he said, on the domestic side, there is a clear relationship between expert analysis and official decisions.

"Before policy decisions, the expert analysis is often illuminating. But once the decisions are taken, it is truly striking how the tune and tone of the analysis changes. Analysts fall over backwards to rationalise the official decision," Subramanian said.

In past too, India has questioned the methodology used by them saying that the country compares favourably with other emerging countries on metrics such as default risk.

In particular, it has pointed to S&P Global Ratings keeping China at AA- despite rising debt and slowing growth while India has been kept at just one step above junk.

Moody's and Fitch too give similar ratings citing Asia's widest fiscal deficit as a drag on the nation's sovereign rating.