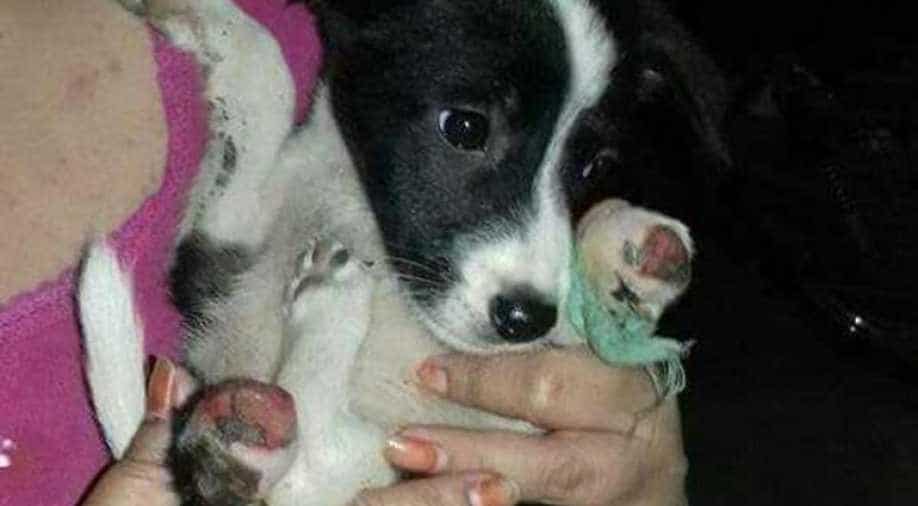 In what may be called a love or its eagerness, the dog scratched the accused's leg with a paw. Pramod got angry and brought a blade to chop off the legs of the puppy, said a senior police officer. Photograph:( Twitter )

A man severed two legs of a puppy after the canine gave him a minor scratch in south-west Delhi's Dwarka following which police have initiated action against the accused under the Prevention of Cruelty to Animals Act.

The incident happened last week when the puppy entered the accused Pramod's house and the latter offered him food, police said.

It was during the feeding that Pramod received a minor scratch from the dog, got angry and chopped off the legs of the puppy with a blade, said a senior police officer from the area.

"Punitive proceeding under section 11 of Prevention of Cruelty to Animals act has been initiated against the offender at PS Palam (sic)," tweeted DCP (Southwest) Surender Kumar.

Punitive proceeding u/s 11 of PCA act has been initiated against the offender at PS Palam.https://t.co/HHgFENRhrT

Earlier this year, a man killed 3 stray dogs and a puppy outside Green Park metro station in south Delhi.

A CCTV footage from the area showed a man suddenly attacking the dogs and killing them all in around 18 minutes. The video was uploaded on YouTube.

The man, identified as Nakul Mishra, was later arrested in Lucknow.

According to police, the 24-year-old engineering student had been suffering from depression.