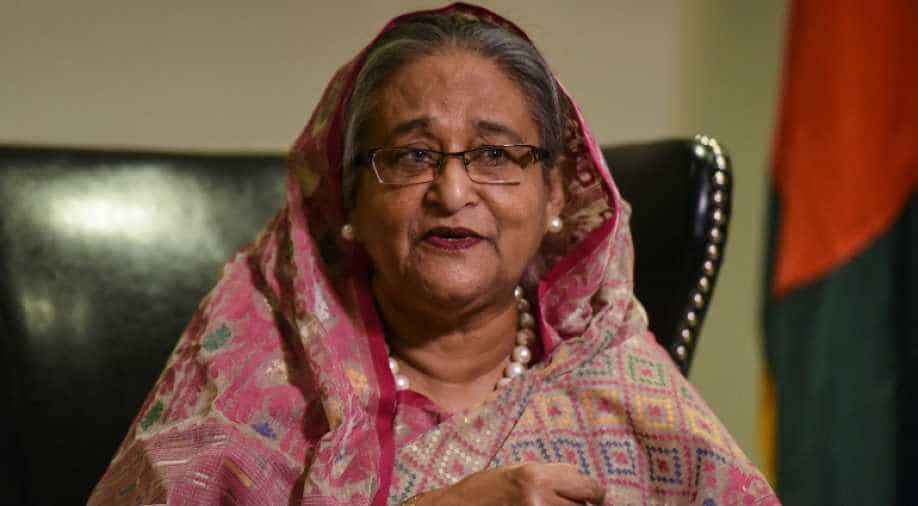 Bangladesh has almost fully utilized the first line of credit of $1 billion extended by India in 2010 with 12 projects completed and the rest in varying stages of implementation. Photograph:( Reuters )

India on Wednesday signed a pact with Bangladesh extending a credit line of $4.5 billion for several infrastructure projects

India on Wednesday signed a pact with Bangladesh extending a credit line of $4.5 billion for several infrastructure projects, as New Delhi tries to expand its influence over its smaller neighbour in the face of growing competition from China.

The loan, the biggest credit line India has provided to any country, was first announced by Prime Minister Narendra Modi in April and takes India's total financial support for Dhaka to more than $8 billion over the past six years.

China is Bangladesh's biggest trade partner followed by India and last year pledged around $24 billion in loans for the South Asian nation, which is one of the world's poorest.

Most of the equipment for the Indian-funded projects will be bought from India, Bangladesh Finance Minister Abul Maal Abdul Muhith told reporters after the signing of the pact in the presence of his Indian counterpart Arun Jaitley in Dhaka.

"A strong, stable and prosperous Bangladesh is in India's interest," Jaitley told reporters. "We are committed to working with Bangladesh to deepen our bilateral ties."

The loan, for 17 projects in sectors ranging from power to ports, health and education, is to be repaid over 20 years at an interest rate of 1 percent.

The first line of credit of $1 billion in 2010 has been almost fully utilized, with 12 projects completed and the rest in varying stages of implementation. About $200 million of that figure was later converted into grant assistance.

Projects identified under the second credit line of $2 billion announced in June 2015 are also being implemented.

Under Modi, India has boosted economic links with Bangladesh, which it has long viewed as part of its area of influence, as well as with other neighbours such as Nepal and Sri Lanka.

At a separate event, the Indian Visa Application Centres, managed by state-run State Bank of India on behalf of the High Commission of India, inaugurated a 'cashless' visa application system aimed at simplifying visa procedures for Bangladeshis.

"The sharing of Indian experiences of the new initiatives for promoting a cashless economy would go a long way in fostering our economic engagement," said Harsh Vardhan Shringla, India's ambassador to Bangladesh.