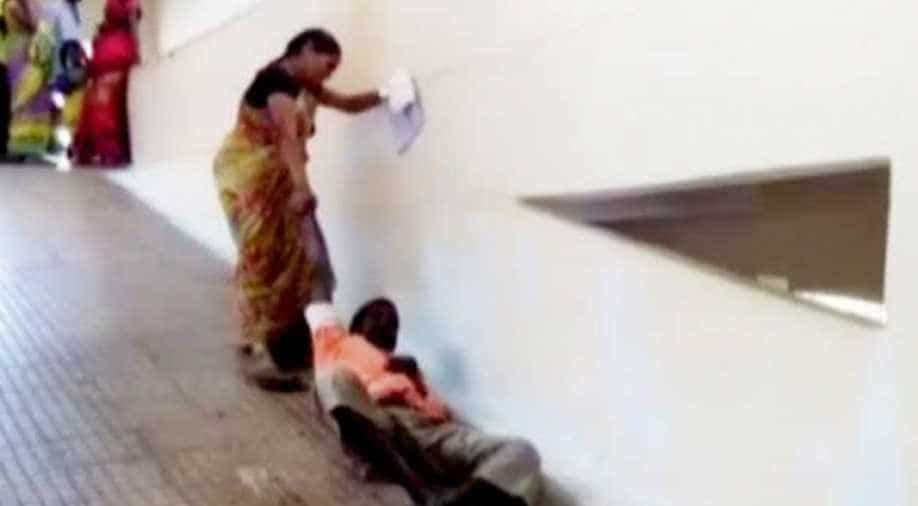 'I asked for a stretcher but the staff replied that there was no stretcher on the ground floor. All the stretchers were on the upper floor,' she said. Photograph:( Others )

In a case of hospital apathy in the Indian state of Andhra Pradesh, a woman was seen dragging her seriously ill husband up the stairs of the Guntakal Government Hospital at Anantapur as stretchers and wheelchairs were not available.

None of the hospital staffers came to her help. She dragged him all the way to the upper floor to get him examined by the doctor. P Srinvasachari, 49, belonging to Madina Masjid Street in Tilaknagar of Guntakal was working as a guard with a private security agency in Hyderabad.

He returned home recently due to ill health. Srinivasachari had been suffering from diarrhoea and stomach pain for three days and had a serious wound on his leg.

His wife Srivani brought him in an autorickshaw to APVP Hospital in Guntakal late on Wednesday. The auto driver dropped him off at the entrance. Srivani approached the hospital staff for a stretcher to take her husband to the first floor of the hospital to meet the doctor.

But none of them responded to her pleas. With no other option, Srivani dragged her husband slowly through the stairs to the upper floor.

“I asked for a stretcher but the staff replied that there was no stretcher on the ground floor. All the stretchers were on the upper floor,” she said.

When the incident went viral on social media, the authorities took a serious view about the negligence of the staff who refused to help the woman. Guntakal hospital superintendent, Dr Ganganna, said he would probe the incident. He said five stretchers were available at the hospital.