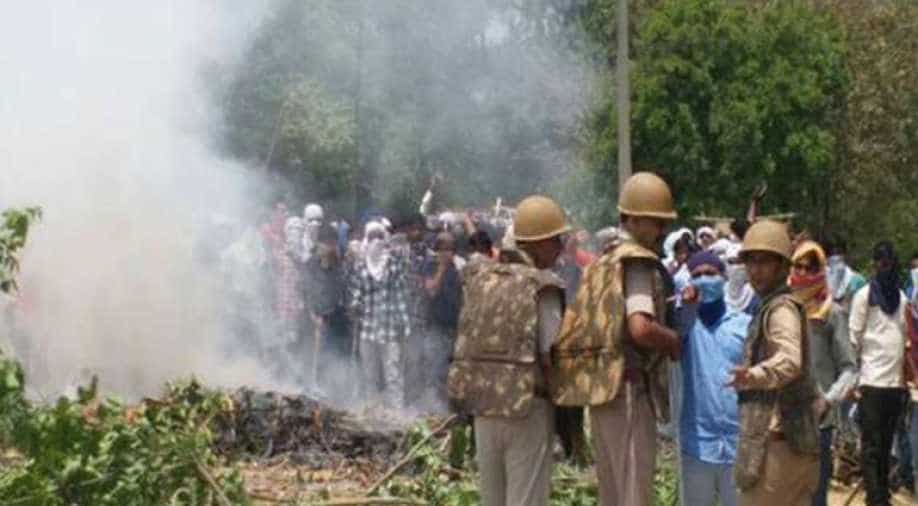 On May 5, a Dalit group objected to a procession of Thakurs marking the birth anniversary of Rajput king Maharana Pratap, triggering violence in which one person was killed and over 15 were injured. Photograph:( Zee News Network )

Saharanpur caste clashes, which are being seen as the Yogi Adityanath government's first major law and order challenge, had political undercurrents, claim leaders of the Dalit and Thakur communities that were locked in a bloody conflict which also sucked Muslims into it.

The spiral of violence started from Shabbirpur village, home to around 600 Dalits and over 900 Thakurs.

Dalit victims of the clashes say upper caste Thakurs prevented them from installing a statue of BR Ambedkar on the premises of the Ravidas temple in the village.

Later, on May 5, a Dalit group objected to a procession of Thakurs to mark the birth anniversary of Rajput king Maharana Pratap, triggering violence, in which one person was killed and over 15 were injured.

Jatav Dalits in the village say Thakurs bottled their feelings up till "Behenji (Mayawati) was in power, but things have changed now".

"With Yogi Adityanath, a Thakur, at the helm of the government, members of his community are asserting their authority.
During the BSP rule, they used to say 'do not even touch Dalits. They are high-voltage power lines'. Now, they have unleashed carnage. This government is barely two months old, five years is a long time," says 62-year-old Dal Singh, who is nursing his injuries at the district hospital in Saharanpur.

Shyam Singh (55), whose house was torched in the clashes, alleges, "The BJP is trying to consolidate its Thakur vote bank through violence as the local bodies polls are close."

"The BJP tried to pit Dalits against Muslims in Sadak Dudhli village, where clashes had erupted in April during a rally organised to mark Ambedkar Jayanti. They are eyeing Dalit votes," alleges Swapnil Bhaskar, another victim of the clashes.

Rajya Sabha MP and former chairman of the National Commission for Scheduled Castes, P L Punia, who recently visited Saharanpur to meet those injured in the clashes, says, "There is an Ambedkar statue at the residence of the village head. But the other group made a big deal about installing a bust on the temple's premises."

"Kshatriyas inflicted atrocities on Dalits and the administration was complicit in the deed. BJP leaders enacted a drama of leading an Ambedkar rally in Sadak Dudhli. The party is openly supporting Thakurs," Punia claims.

BJP activists, led by local MP Raghav Lakhanpal Sharma, had on April 20 taken out a march in Sadak Dudhli without the administration's approval to mark Ambedkar Jayanti, which Dalits celebrated on April 14.

Its participants clashed with the Muslim residents.

Jignesh Mewani, the face of last year's Dalit agitation in Gujarat, says, "Fascist forces have broken loose ever since Yogi Adityanath became the Uttar Pradesh chief minister. They feel encouraged. Earlier, there were no rallies on the birth anniversary of Maharana Pratap. This time, they broke with tradition."

"Dalits in the village alerted the police when the situation took a turn for the worse. According to the Scheduled Castes and the Scheduled Tribes (Prevention of Atrocities) Act, the administration is required to take pre- emptive measures in such a case, but it did absolutely nothing. It shows someone else was pulling the strings," Mewani, who is a lawyer, alleges.

"A pregnant woman was attacked with a sword and an attempt was made to immolate a child. What happened to the policy of 'sabka sath sabka vikas'?" he asks.

He says the Bheem Army -- a Dalit group which, the police say, was behind the May 9 violence in the district -- is committed to holding peaceful protests.

The police's highhandedness against a group of Dalits who gathered in Gandhi Park for a 'mahapanchayat' to demand compensation for those affected by the May 5 clashes was responsible for their outburst, he says.

Mewani alleges that Sher Singh Rana, who was in 2014 convicted by a Delhi court for murdering dacoit-turned- politician Phoolan Devi, a Dalit, "was invited to garland a statue of Maharana Pratap on his birth anniversary. It is clear that they want to instil fear among Dalits."

Sher Singh, who is out on bail, claims non-allegiance to any political party.

He says he was invited as the chief guest at a function in Simlana village, 4 km from Shabbirpur, when he came to know that a Thakur youth had been killed in clashes with the Jatavs.

"Shabbirpur village head Shiv Kumar, a Dalit, led a group which blocked the procession of Thakurs, triggering heated arguments. The police were informed, but it was too late," he says.

"A few political parties are engineering riots to split the vote bank of the BJP, which trounced them in the Uttar Pradesh Assembly polls. When the rival parties saw that Dalits had also started believing in the BJP, they pit them against Thakurs," he alleges.

The BJP's Raghav Lakhanpal Sharma represents Saharanpur in the Lok Sabha, while the Samajwadi Party's Sanjay Garg is the local MLA.

Garg defeated the BJP's Rajiv Gumber by over 4,000 votes in the February-March assembly elections.

The BSP, which had won four of the seven assembly seats in Saharanpur in 2012, drew a blank this time.

Kartikey Rana, son of former UP minister Rajinder Singh Rana, says the BSP is trying hard to save its vote bank, "the violence is the result of this desperation".

He warned of protests by Thakurs across the city if the police failed to arrest Bheem Army founder Chandrashekar Azad and the Shabbirpur village head, who police sources said have gone into hiding.

Azad, however, emerged at the Jantar Mantar yesterday to lead a protest against alleged atrocities on Dalits in Uttar Pradesh.

Manoj Rana, a 26-year-old Thakur who had a close shave on May 9 when the Bheem Army allegedly went on the rampage in several areas in the city, says, "The Dalit group is said to be two-year-old, but we never heard of it. It sprang into action only after the assembly elections. Opposition parties, especially the BSP, suffered a severe drubbing in the polls. Fearing for their future, they are orchestrating riots."

Both sides, however, allege police inaction.

"28 people have been arrested in connection with incidents of stone- pelting and arson, and those at large will be soon nabbed."

SP (City) Prabal Pratap says the police have been on their toes and have launched a crackdown on those trying to foment tension by circulating inflammatory messages on social media.