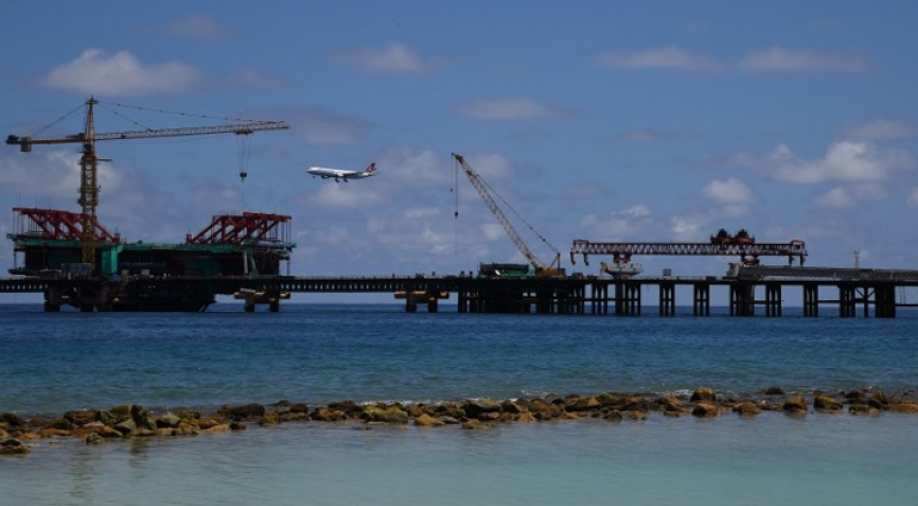 The China Maldives Friendship Bridge on February 8, 2018. Photograph:(AFP)
Follow Us

India did not attend a recently held inauguration of a China-funded bridge in the Maldives.

India's ambassador to Maldives Akhilesh Mishra was not present at the inauguration of the bridge officially known as the Sinamale Bridge on Thursday. Though according to a top Maldivian government the Indian ambassador was invited.

The inauguration was conducted in the presence of a representative of the Chinese government and was marked by Chinese fireworks.

A Maldives opposition leader Ahmed Mahloof later tweeted that only Chinese ambassador's car was allowed to enter the event and the ambassadors of Sri Lanka and Bangladesh were stopped from entering the inauguration.

Mahloof said, " Ambassadors of Sri Lanks and Bangladesh boycotted the bridge inauguration event as their cars were stopped by Yameen's security and they were asked to walk. Only Chinese Ambassador's car was allowed to pass up to the venue.

Ambassadors of Sri Lanks and Bangladhesh boycotted the bridge inauguration event as their cars were stopped by Yameen’s security and they were asked to walk.
Only Chinese Ambassador’s car was allowed to pass up to the venue.
Such an insult to traditional friends.

The Maldives opposition had stated earlier that the bridge had pushed the nation deeper into "debt trap".

It said that with its project President Abdulla Yameen had driven the nation deeper into a Chinese " debt trap" with US $200 million bridge.

The opposition termed the bridge as the symbol of Yameen's "corruption".The government on the other hand has denied claims of corruption.

The bridge was opened just ahead of the country's election scheduled for September 23.

The 1.4 kilometres (0.9 miles) three-lane bridge links the congested capital of Male to the airport island.

Yameen pledged to build the bridge during his 2013 election campaign and made infrastructure development a key plank in his reelection bid.

The project was launched when China's President Xi Jinping visited the Maldives in 2014 and Male pledged support for China's ambitious US $1 trillion Belt and Road infrastructure project across Asia and Europe.

The Supreme Court annulled the results of the first round of voting when Nasheed was in the lead.

The subsequent vote was then twice delayed, allowing Yameen time to forge alliances that helped him narrowly win the contested run-off.

Nasheed has been barred from running in the September vote.