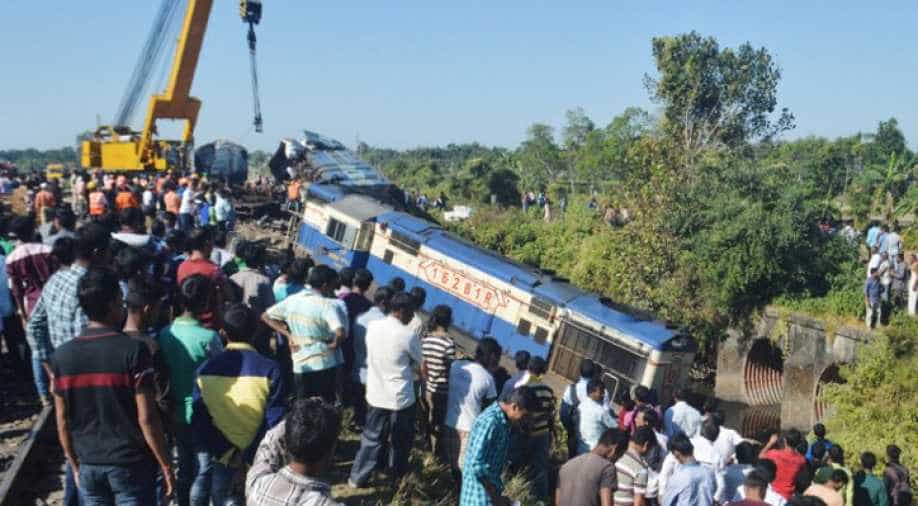 At least 54 people were injured but officials said the number could go up since a number of people were feared trapped in the wreckage. (Representative image) Photograph:( AFP )

At least 39 people were killed and 54 injured as the Jagdalpur-Bhubaneswar Express derailed in Vizianagaram district of Andhra Pradesh. The derailment happened at 11 pm Saturday as the train was on its way to the Odisha capital Bhubaneswar from Jagdalpur in Chhattisgarh.

Four accident relief vans have been sent to the accident site, the railway official added.

The reason behind the incident is not clear. Meanwhile, railway ministry sources have told ANI that the element of sabotage has not been ruled out yet.

Earlier, the Rayagada sub-collector Muralidhar Swain had said that the number of injured could be around 100. The casualty figure could go up as many people are trapped, he added.

The injured have been shifted to two hospitals at Parbatipuram and Rayagada.

Railway minister Suresh Prabhu announced compensation of Rs 2 lakh for the families of the deceased, Rs 50,000 for those who have been severely injured and Rs 25,000 for injured. The railway minister, along with Railway Board chairman A K Mittal, are rushing to the spot in Andhra Pradesh.

Prime Minister Narendra Modi expressed grief over the loss of lives in the train mishap. "I pray for a speedy recovery of all those injured due to the train accident. The Railway Ministry is monitoring the situation very closely and is working to ensure quick rescue and relief operations," the Prime Minister`s Office said in a series of tweets.

"One NDRF team from Visakhapatnam is present at the derailment site in Andhra and four teams from Bhubaneswar are en route for rescue operations," he tweeted.

Services were affected on Rayagada and Vijayanagaram route, with several trains diverted.