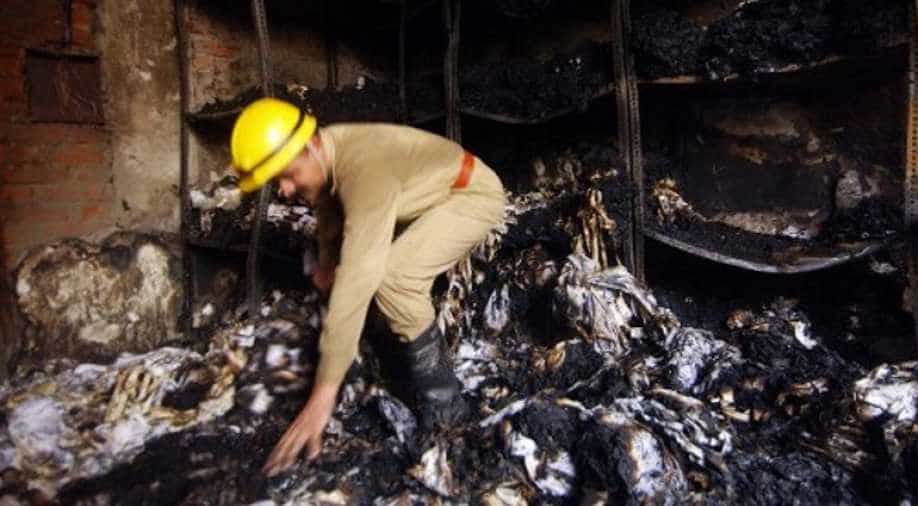 Local fire officer Abbas Hussain said two workers woke up and screamed at the others to do so too, but none of them did. 'Perhaps it was already late.' (Representative image) Photograph:( AFP )

Thirteen people died and several others were injured after a fire broke out at a garment factory near the Indian capital of Delhi in the wee hours of Friday morning, AFP reported today.

The factory is thought to be unauthorised.

It is thought the fire was triggered by a short circuit. Workers were sleeping inside the cramped leather factory when the fire broke out, AFP reported.

"The fire broke out at a factory in a residential area of Sahibabad around 4:30 am in the morning. 13 people, who were sleeping there have died and another two or three people are getting treated at the hospital," Bhagwat Singh, local police spokesman, told AFP.

Local fire officer Abbas Hussain told AFP that two of the workers woke up and managed to save themselves. They shouted at the others to wake up but they didn't.

"Perhaps it was too late," the officer said.

"From what we see, there was nothing proper and the factory must surely not have been a legal one but we can say for sure only after a proper investigation," Hussain told AFP.

India has a notorious workplace safety record. Eight workers were killed last month in a massive explosion in a fireworks factory in the southern Indian state of Tamil Nadu. Fifteen people died in fire cracker factory in May 2014 in the central Indian state of Madhya Pradesh, and six workers died in a fire at a leather bag factory in November 2013 in the capital city of New Delhi.