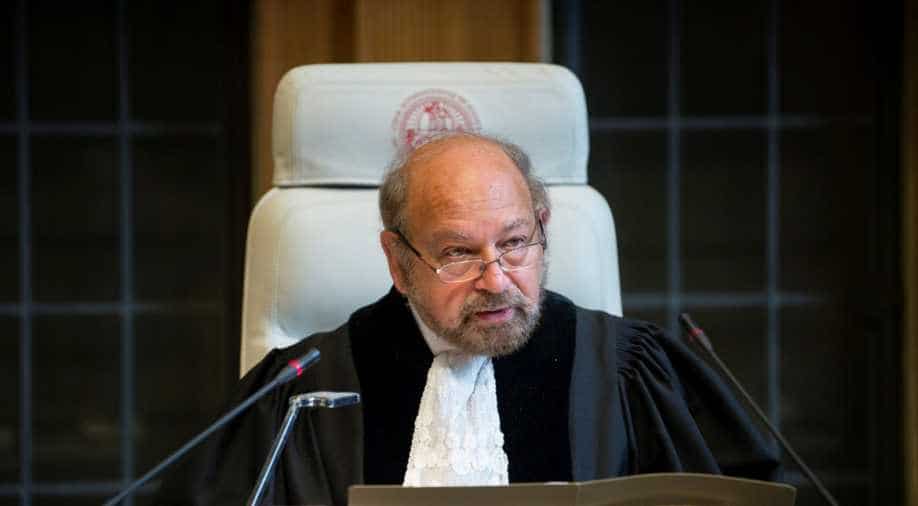 Pakistan to ensure Mr Jadhav is not executed pending the final decision of this court: ICJ

Pakistan will inform the court the measures it is taking to ensure Mr Jadhav's protection: ICJ

There is every possibility of Mr Jadhav being executed after the deadline for his execution provided by Pakistan lapses which may be before the verdict of this court; will ensure certain provisional measures: ICJ

Pakistan shall ensure all measures are taken for Mr Jadhav's protection: ICJ

Without prejudging the result of any appeal, the court considers that the mere fact that Mr Jadhav is under such a sentence a sentence and might be executed shows there might be such a risk of his execution: ICJ

The court need not seek determinatively whether the rights India wants to protect exist. Court will take all measures to ensure all measures are taken to ensure Mr Jadhav is not executed: ICJ

Court has prima facie jurisdiction under Article 1 to entertain dispute between the two parties: ICJ

Both India and Pakistan agree that Kulbhushan Jadhav is an Indian citizen, India should have been given consular access as per Vienna convention: ICJ

The UN International Court of Justice, based in The Hague, "will deliver its order on the request for the indication of provisional measures made by India" in the Kulbhushan Jadhav Case (India v. Pakistan) today

ICJ  says will render order as soon as possible. The date will be duly communicated to the parties.

At no point was India denied consular access to Kulbhushan Jadhav: Pakistan

There are flaws in India's approach asking court to not permit oral hearing: Pakistan

Jadhav confessed on tape. Court can decide for itself whether he was coerced into confession: Pakistan

What has India done to establish Jadhav is an Indian national. He is in possession of a palpably false passport. India was given a copy of the passport but has failed to respond to queries: Pakistan

The relief that is being sought by India is palpably unavailable. ICJ is not a criminal court of appeal: Pakistan

India generated a sense of urgency, improperly invoked the jurisdiction of the court on the basis of imminence, it wants provisional measures on the basis of this urgency invoked. But six months is not urgent in anybody's book: Pakistan

India did not provide court with substantive material which was given to it. Pakistan sought the assistance of Indian authorities to bank account details of Jadhav and other details. India failed to provide the details: Pakistan

India has sought to persuade this court that Pakistan will execute Kulbhushan Jadhav within days. A period of 150 days is provided which even if it started on April 10, 2017, could well extend beyond August 2017. An expedited hearing is an approach that Pakistan would invite the court to adopt: Pakistan

Jurisdiction of ICJ is limited. If an applicant wants to invoke such an extreme jurisdiction, it should ensure full facts are presented before court. Says Paragraph 20 stressed Jadhav would be executed irrespective of merits and it was presented this could happen any day. Pakistani authorities had made it clear that Jadhav was not eligible consular access: Pakistan Supreme Court lawyer Khawar Qureshi

Pakistan to present its case before the International Court of Justice (ICJ) at 6:30pm

The Republic of India defence was presented by Harish Salve, Deepak Mittal and Dr. Sharma.

Islamic Republic of Pakistan will present its case after a break.

The proceedings will be live now at 6:15 PM IST onwards.

Please indicate provisional measures that Pakistan takes actions to ensure that Jadhav is not executed.

That Pakistan report to this Court under the governed laws.

Where the national of one country is tried in another country, the statutes of Vienna Convention are absolute.

The Vienna Convention embodies a vital code of conduct.

Violations of rights of individual would mean violation of the rights of the State.

Since March 2016, violations have continued. India invites attention of this Court on violations meted out by the Pakistan Court.

This is a completely untenable position. It is a clear violation of Vienna Convention.

The more serious the charge, the greater need for procedural charge.

India relies on Vienna Convention of the Court to meet justice in Jadhav's case.

The agreement of consular access between India and Pakistan has not been respected.

India does not rely on bilateral agreement on consular access as it is clearly stated that the agreement as under Article 73, was with the objective: furthering the objective of humane treatment of any national abducted, arrested, detained. These are the obligations that govern the same.

India does not rely on this agreement. It bases its claims solely on Vienna convention.

It establishes more than just prima facie violation of the Vienna Convention.

Indian sent a reminder on 30 March after no consular access was granted by Pakistan after the first request. The requests have no illicit response from Pakistan.

These rights have been breached by Pakistan.

On March 3, 2017, India reminded Pakistan of this breach. The case for consular access for an Indian national was to be tried but Pakistan did not respond.

India asserts that consular access was prerequisite to identify his motivation of being in Pakistan and of his said activities.

A press statement of Pakistan established the following facts: FIR was registed on 8 April and confessional statement was recorded in front of Army and a Court Martial was dictated.

It establishes that Indian national's human rights have been violated, that the country (India) was not informed of the trial and that the accused was kept in dark.

India does not seek any regulation of Pakistan's way of trial but only to highlight what went by in Jadhav's case.

On 8 May, when India brought the case to the Court, both India and Pakistan were part of the Convention and continue to be.

India asserts that this case also falls under the Vienna Convention.

When the trial is by a military court, the need for consular access to the concerned person is all the more greater.

India asserts that breach of Vienna Convention is grave and fatal.

Pakistan has rejected all points provided by India.

India has submitted sufficient basis for the case to be decided upon.

The urgency in the present case:

In relation to Jadhav's arrest on trial. Irreparable injustice being met to India and Jadhav.

Without more a good reason for indication of provisional measures.

Jadhav's mother has filed an appeal, as a measure of desperation which has been relied upon to convict him. Visa applications filed by his parents in 2016 are still impending. The communication goes to declare that Jadhav can seek clemency, but it isn't clear what clemency would mean.

Pakistan has declared that there is no inaccuracy in Jadhav's case which is glaring.

The verdict is based on incontrovertible evidence.

According to Pakistan: Jadhav was tried under the laws of Pakistan under espionage and terrorist activities resulting in loss of lives of many in Pakistan.

India has constantly said that Jadhav was framed and arrested from Iran.

The potential lapse of time makes this case impertinent to be judged with immediacy.

Mr. Harish Salve, counsel of the Republic of India: I express on behalf of my country, gratitude for having fixed this at such a short notice. The situation is grave and urgent and we have sought indulgence of this Court for indication of provisional measures.

India has moved this application under Article 40 of the Court, violation of Vienna Convention Article 63; it is against Pakistan, where an Indian national Jadhav was allegedly arrested. He has been convicted and sentenced to death. India had requested Pakistan for consular access but was denied.

Despite India's request, the right to visit and consular access, have been denied.

Jadhav was not entitled to consular access, as said by Pakistan.

India has applied to this Court in violation of Vienna Convention.

Dr. Sharma, co-agent of the Republic of India: Concerning violation of the rules of law, I drive attention to para 5 of my statement to you: The Convention sets up standards of friendly relations between countries. Rights of consular access for those who are detained. Rights of the nationals of the State are sacrosanct. It entails serious consequences. Pakistan denied consular access to its nationals. Since March 2016, they have denied Mr. Jadhav of all rights.

Deepak Mittal: Despite requests by India, Pakistan has not provided any documents, summary of evidence, request for appointment of defence, or anything else. Jadhav's parents applied for visa but there has been no response. He has also not been provided with consular access under Vienna Convention. He has been denied the right to seek consular access. he has been taken in captivity, it is fascist. All India knows is via Pakistani media.

Deepak Mittal: It is testament to Mr. Jadhav's case which is urgent. All rights of human rights have been thrown to the winds. This institution has given hope to 2.5 billion people of India. Today, accompanied by my colleague, I represent Republic of India.

Deepak Mittal, on behalf of India, invited to speak

Both parties are advised to not use the entire full minute of proceeding: they must limit themselves. They should not enter into merits of the case beyond what is strictly necessary.

Referring extreme gravity and immediacy, India passed the Court (ICJ) to render an order without a hearing. The Court has decided to take order, in the presence of both parties ( India and Pakistan)

Each party will have full 90 minutes sitting.

Pakistan foreign secretary being sent to The Hague.

Watch the live proceedings of the public hearing here: