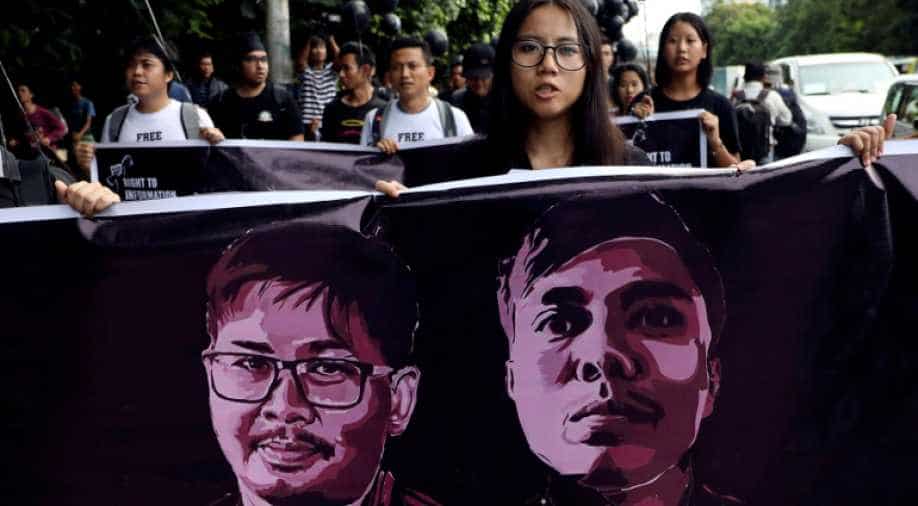 Dozens of people marched through Myanmar's largest city Yangon on Saturday, calling on the government to release Reuters journalists on trial for allegedly collecting state secrets, and to demand press freedom.

Black-clad protesters marched with banners, flags and balloons with the faces of the two jailed Reuters journalists - Wa Lone and Kyaw Soe Oo - printed on them.

A Yangon court is on Monday expected to hand down the verdict in the case against Wa Lone, 32, and Kyaw Soe Oo, 28, who have been charged under the colonial-era Official Secrets Act.

Press freedom advocates, the United Nations, the European Union and countries including the United States, Canada and Australia have called for the Reuters journalists' acquittal.

Myo Myint Maung, Permanent Secretary for the Ministry of Information told Reuters by phone: "No matter what side you are on, freedom of the press is important."

"In the current situation, you can say that we have it (freedom of the press), but there may also be things that we can improve on."

Government spokesman Zaw Htay has in the past said of the case against Wa Lone and Kyaw So Oo that Myanmar's courts are independent and the case will be conducted according to the law.

At the time of their arrest, the reporters had been working on an investigation into the killings of 10 Rohingya Muslim men and boys in a village in western Myanmar’s Rakhine State.

The killings took place during an army crackdown that United Nations agencies say sent over 700,000 people fleeing to Bangladesh.