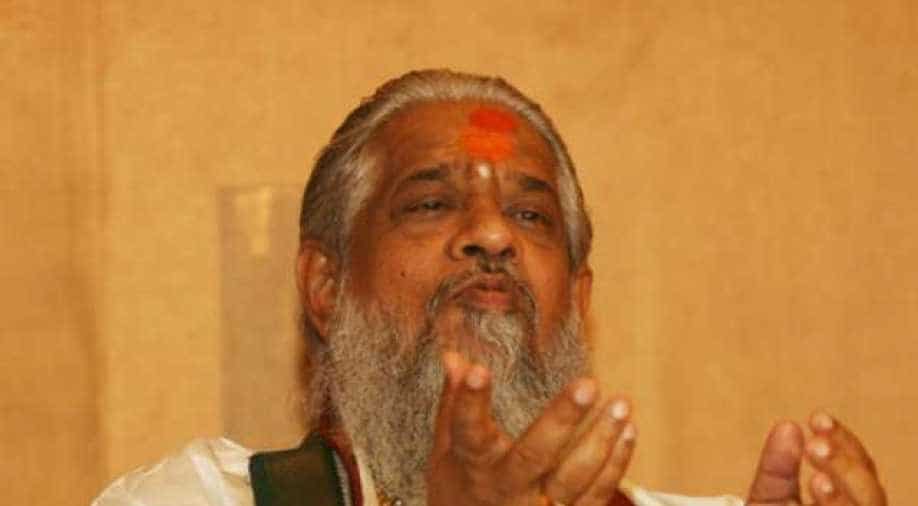 Often mired in controversy, Chandraswamy's name cropped up in investigations into Rajiv Gandhi's death in a bomb blast executed by the Liberation Tigers of Tamil Eelam (LTTE). Photograph:( DNA )

Controversial self-styled godman Chandraswami, who had the dubious distinction of being able to make politicians and top businessmen prostrate at his feet, died in obscurity at a hospital here at age 66 today.

Considered close to former Indian prime minister P V Narasimha Rao, Chandraswami, the bearded, draped-in-silk godman with a tilak prominent on his forehead, was not one of those run-of-the-mill godmen content with the devotion of his followers. He was in the thick of things, and his name cropped up in several unseemly cases, whether it was Foreign Exchange Regulation Act (FERA) violations, illegal arms deals, blackmail, cheating or fraud.

Born Nemi Chand Jain, Chandraswami's first brush with the powers-that-be was due to his association with another former Indian prime minister, Indira Gandhi. In fact, Indira Gandhi is said to have donated the land for his ashram in New Delhi's Qutab Institutional Area.

Chandraswami's alleged role in the assassination of former Indian prime minister Rajiv Gandhi also came to light in a report submitted by the M C Jain judicial commission that probed the conspiracy behind the killing of Rajiv Gandhi. Gandhi was killed by an LTTE 'human bomb' in Sriperumbudur, near Chennai, on May 21, 1991, for deploying the Indian Peace Keeping Forces (IPKF) in the island nation.

Chandraswami was last in the news in 2014 when the Delhi Police probed a complaint by a businessman that he was robbed off gemstones worth Rs 3 crore at the tantra expert's ashram in Qutub Institutional Area in Delhi.

The Congress in submissions before the Jain Commission in 1997 accused Chandraswami of having financed the assassination of Rajiv Gandhi and playing a key role in a conspiracy hatched by various terrorist outfits in London and executed by the LTTE.

In its report, the Jain Commission dedicated a volume to his alleged involvement. The Enforcement Directorate also investigated his alleged role as financier of the killing.

In May 2009, the Supreme Court lifted a ban on the godman's overseas travel. The ban came in the wake of his alleged involvement in the Gandhi assassination case.

Hearing a plea by A G Perarivalan, who was one of the convicts in the Rajiv Gandhi assassination case, the Supreme Court asked the Central Bureau of Investigation (CBI) to give a time-frame for the completion of the probe. The top court said that the larger conspiracy behind the assassination needs to be unearthed.

Chandraswami's name also figured in a number of FERA violations.

An income tax raid at his ashram revealed original drafts of payments worth $11 million to Adnan Khashoggi.

Khashoggi was allegedly involved in the Iran-Contra affair, a political scandal during the second term of US President Ronald Reagan in wghich senior officials had secretly facilitated the sale of arms to Iran. Iran was under an arms embargo.