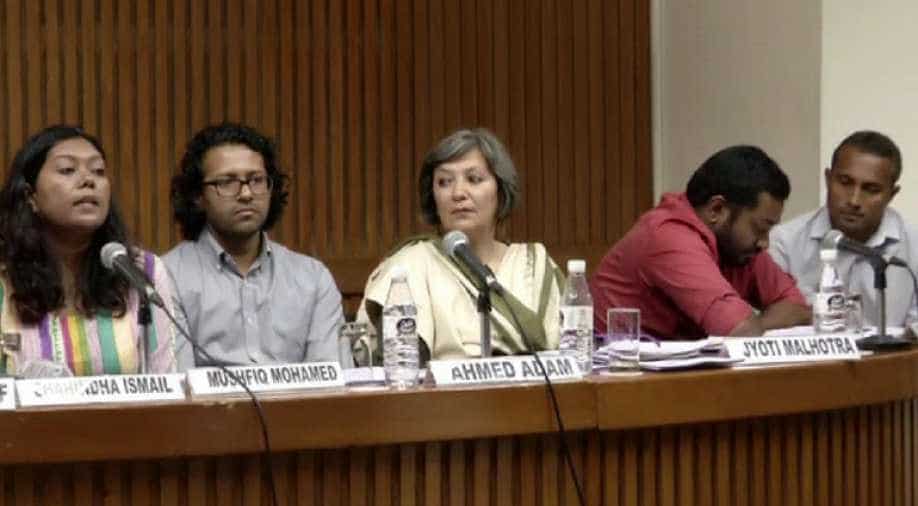 Civil society members from Maldives have called for restoring democracy in the wake of ongoing political turmoil in the island nation. They have sought help from the international community to have free and fare presidential elections scheduled to be held on 23 September this year.

A panel of senior journalists, lawyers and representative from NGOs attended a roundtable discussion on the current situation on the Maldives in New Delhi on Tuesday.

The objective was to identify avenues for greater collaboration among national and international civil society members to address restrictions in civic space, media, freedom of speech and peaceful assembly in Maldives.

Maldives has been facing instability as President Abdulla Yameen and his government has cracked down on opposition political parties, curtailed fundamental freedoms, and repeatedly violated the Maldives' international human rights obligations.

In February 2018, Yameen declared a state of emergency, restricted constitutional rights, suspended forces, and curtailed the authority of the judiciary. In the ensuing crisis, the government arrested two Supreme Court judges along with several others.

Speaking to ANI, Afnan Ibrahim, Project coordinator of Maldivian Democracy Network (MDN), a NGO, said elections must be held on scheduled date despite having crackdown on opposition and judiciary.

"It doesn't seem like the political prisoners are going to be released regardless of the Supreme Court's order to release them. Therefore, I feel, if we wait, we are just going to keep waiting and the authoritarian government that we have right now, is going to increase its power and possibly figure out more ways to rig the elections. That's going to be dangerous. It is important that we carry out as planned," she said.

Director of Maldivian Democracy Network Shahindha Ismail said: "The situation is very tense and chaotic. We have been seeing different components of the state and the government going backwards on democratic norms, which has opened up the space to question the freedom of holding the elections. The situation is critical."

"We do join in the call for due process and fare trials and in that sense those in the custody right now have been in custody arbitrarily and, therefore, must be released. If there is an allegation against the political leaders or anybody else, they have the absolute right to fare trial," she added.

The Maldivian government has repeatedly disregarded the opinions and the urgings of the UN Human Rights Committee.

Earlier, a UN Working Group on Arbitrary Detention condemned the trial of former President Nasheed and his conviction for 13 years on terrorism charges.

The government rejected the Committee's directive, pointing Article 109 of the Constitution, which prohibits any individual who has been convicted of a criminal offence and sentenced to more than twelve months from running the office.

"We feel very encouraged by the refusal by Prime Minister Modi not to visit the Maldives and I think it is very clean indication that he is not happy with how things are going on in the Maldives.

The recent interview that the Prime Minister gave with the statement about the need for Maldives to restore democracy and ensure free and fare elections, I think it is very encouraging and it is something that India can build up on. I believe there are several avenues in which the message can be specified into action. And I hope India will do that", said Shahindha.