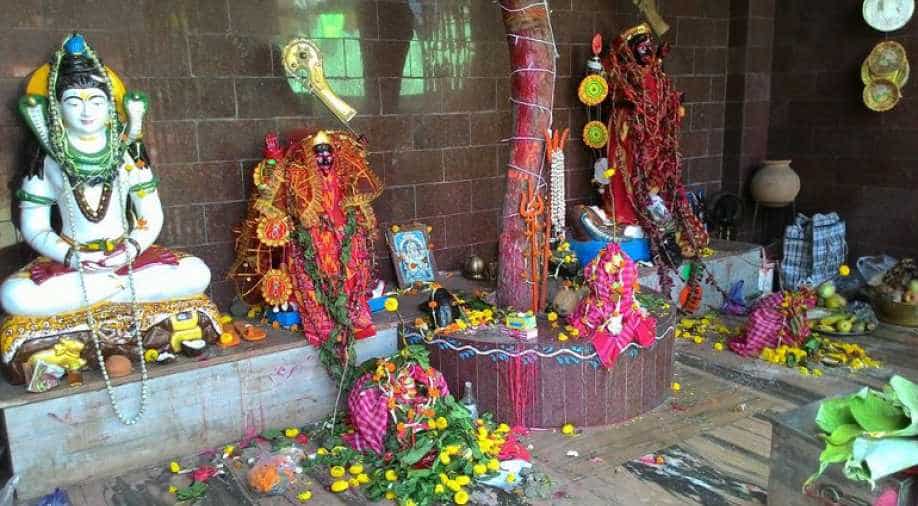 This Chinatown in Kolkata is not like its swanky and colourful counterparts in other countries across the globe. It is marked by crumbling buildings, filthy roads and evokes a sense of cultural assimilation. Photograph:( WION )

Home to infinite shrines dedicated to deities of various religions, India also has a number of unusal places of worship, which might be difficult for some to understand.

When we speak of the unusual temples or shrines, the Chinese Kali temple in India’s eastern city of Kolkata is not far behind. Located in the heart of Kolkata’s Chinatown or Tangra area, this temple of the Hindu goddess Kali, representing the power of destruction, is looked after by the dwindling ethnic Chinese community in the city.

Much before the rest of the city wakes up, the Chinese community in Tangra offer their prayers to the Hindu goddess sans any prejudice or religious discrimination.

As you walk along the narrow lanes of Tangra, surrounded by leather tanneries, budget restaurants run by the Chinese community, slaughter houses and shabby buildings, you will find a granite-walled building of the Chinese Kali temple in midst of all these.

This Chinatown in Kolkata is not like its swanky and colourful counterparts in other countries across the globe. It is marked by crumbling buildings, filthy roads and evokes a sense of cultural-assimilation.

Behind the closed doors of the decaying buildings is the vast history of the Chinese community. Step inside, and you discover how this fading community is cherishing its tradition and past silently and quietly.

The more heart-warming feature is the community’s tolerance towards other religions like Hinduism and Islam, as they co-exist with their brothers without any religious bias or complaints. The Chinese Kali temple is a symbol of this unique cross-cultural assimilation.

“This site of worship was first discovered in 1942. The temple was not there in the beginning. There was a stone, smeared with vermilion that was considered to be spiritual by the Hindu community living here."

"As the story goes, once a 10-year-old Chinese boy was cured of his illness after his mother prayed before the stone. It was since then that the stone was worshipped by the Chinese people here."

"Later, a Chinese family, who is currently residing in Canada, built this temple here and placed idols of goddess Kali inside it,” said 60-year-old caretaker of the temple, Ison Chen. He was selected by the Chinese people in the area to look after the temple.

The idol of goddess Kali is similar to the ones found in Hindu temples across the country. The temple resembles any other place of worship for the Hindus.

A Hindu priest from the neighbourhood comes to worship the deity every morning. “It’s a Chinese temple. There’s no doubt about it. But, devotees follow the Hindu rituals to offer their prayers."

"However, there are some quaint Chinese customs that have crept in,” said 45-year-old Laleswar, who runs a shop in front of the temple.

The temple looks Chinese only when the devotees from the ethnic community gather with red candles, hand-made papers and Chinese incense sticks to offer their prayers before the deity.

The manner in which they rotate the incense sticks in front of the goddess is different from the way the Hindus pray. Unlike the Hindu temples where the deity is offered fruits and sweets, the Chinese community here gives noodles and chopsuey to the goddess.

“We used to offer wine and noodles to the goddess. This was followed for a long time. But now, the community is fast vanishing. Today, the number of Chinese people living in Tangra has come down from 25,000 to 5,000. We offer our prayers on some selected days only like the Chinese new year, Diwali, etc,” said local businessman from the community, Michael.