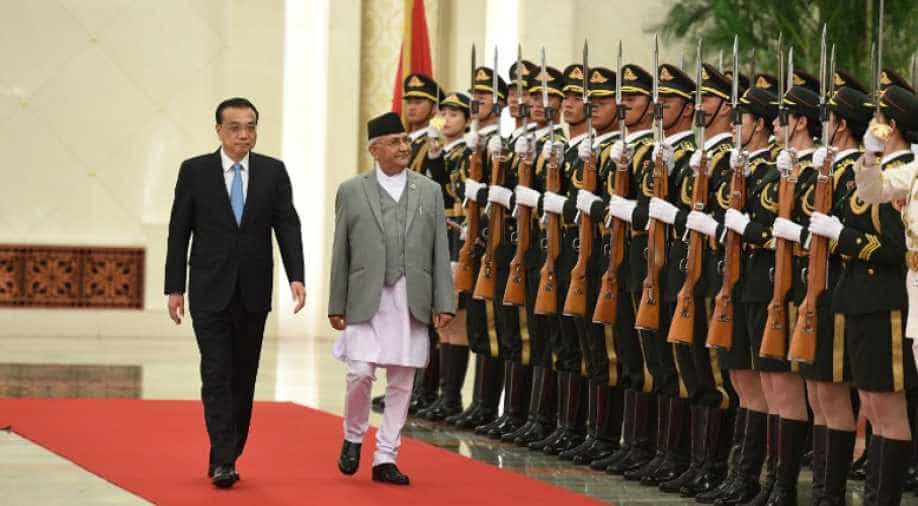 China and Nepal have agreed to build a strategic railway link connecting Tibet with Kathmandu, which Nepalese Prime Minister K P Sharma Oli sees as an alternative trade route for supply of commodities to the landlocked Himalayan nation.

Oli, who is here on a five-day visit, held talks with President Xi Jinping and Premier Li Keqiang, following which a Memorandum of Understanding (MoU) was signed to build the railway link through the arduous Himalayan terrain yesterday, along with 14 cooperative documents.

This is the second significant initiative by Oli, after he signed a transit trade treaty with China during his brief previous tenure in 2016 to reduce dependence on India for transportation of goods to Nepal.

Oli has said the road and rail links through Tibet could be alternative trade routes for the supply of commodities to Nepal.

The new railway line will connect the Gyirong trading port in the city of Xigaze in Tibet with the Nepali capital Kathmandu, Vice-Foreign Minister Kong Xuanyou was quoted as saying by the China Daily, after the two meetings.

The Kathmandu Post quoted Nepal's Foreign Minister Pradeep Gyawali as saying that the detailed project planning report (DPR) of the Kerung-Kathmandu rail line would be completed in one-and-a-half years or so.

He also said the construction would be completed in another five years.

China has been building rail, road and air links in the remote Tibet spending billions of dollars. A railway line was put in operation in 2014, linking Tibet's provincial capital Lhasa with Xigaze.

Xigaze which is also known Shegatse, is the closest Tibetan city to Nepal. Earlier, there were reports in the Chinese official media that the railway line was to be extended till India.

During his talks with Oli, Xi assured him that he is keen to see the Nepal-China cross-border connectivity come to fruition.

"The train from Shigatse (Tibet) will arrive in Kathmandu," Xi was quoted as telling Oli in the Nepali media.

The two sides underscored the railway line as the most significant initiative in the history of bilateral cooperation and believed that it would herald a new era of cross-border connectivity between the two countries, according to a joint statement issued by the two nations.

China has agreed to provide support in technology and personnel training.

"The two sides agreed to intensify implementation of the MoU on Cooperation under the Belt and Road Initiative (BRI) to enhance connectivity, encompassing such vital components as ports, roads, railways, aviation and communications within the overarching framework of trans-Himalayan Multi-Dimensional Connectivity Network," the statement said.

While the details of the agreement of the specially funding were not revealed, the statement, which was released at the end of Oli's visit to Beijing said, "both sides expressed happiness over the signing of the MOU on Cooperation for Railway Connectivity".

The two countries also agreed to make good use of the long-term communication mechanism on railway cooperation between government departments.

For its part, Nepal has agreed to intensify the implementation of MoU on China's BRI. India has expressed strong reservations over the BRI as the China-Pakistan Economic Corridor (CPEC) traversing through the Pakistan-occupied Kashmir (PoK) is its flagship project.

Both sides expressed happiness over the conclusion of agreements on the Reconstruction of Friendship Bridge and Resuo (Rasuwa) Bridge a protocol on the utilisation of highways in Tibet Autonomous Region by Nepal for cargo transport, the statement said.

Besides, both sides also agreed to study through different ways on the possibility of building oil storage facilities in the sites identified by Nepal, it said.

They also agreed to encourage Chinese and Nepali airlines to launch and operate more direct flights between the two countries. The two countries will coordinate to speed up the construction of the Pokhara international airport, the statement said.

Nepal and China reiterated their firm commitment to respect each other's independence, sovereignty and territorial integrity, and respect and accommodate each other's concerns and interests, the statement said.