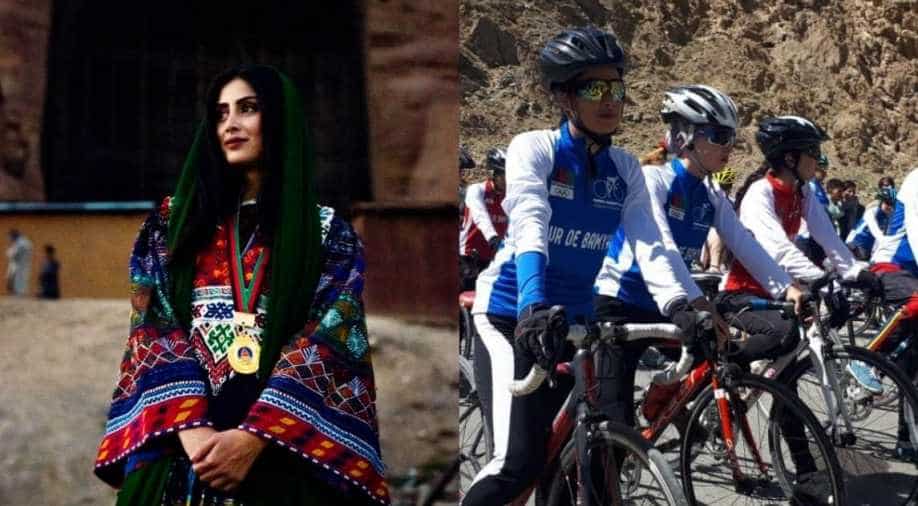 Many in the conservative country see cycling as a sport reserved for men, so for Habibzai and the dozens of other cyclists on the national women's team riding is about fighting the taboo and claiming equal space on the city's streets.

Almost every morning, before rush hour clogs up the streets of Kabul, professional athlete Rukhsar Habibzai puts on her helmet, goggles and cycling shoes and rides door-to-door picking up women for a training session around Afghanistan's capital.

Many in the conservative country see cycling as a sport reserved for men, so for Habibzai and the dozens of other cyclists on the national women's team riding is about fighting the taboo and claiming equal space on the city's streets.

With Kabul's air cleaner than usual following the coronavirus lockdown and the city announcing it will soon create its first cycle lanes, Habibzai and her teammates are zipping around town to encourage more young women to get on their bikes.

Fazli Ahmad Fazli, president of the Afghan Cycling Federation is very proud of Rukhsar Habibzai, the 24-year-old captain of the team, WION spoke to Habibzai in an exclusive chat and got to know more about her journey.

Here are the excerpts from the interview:

WION: Tell us something about yourself and about your life in Afghanistan.

Rukhsar: Hi This is Rukhsaar Habibzai from Afghanistan women's cycling team and right now I'm studying dentistry and I want to become a maxillofacial surgeon which is one of my dreams to serve my people. It is very important for me to complete my education. Since I'm a cyclist too, it's not so easy to handle everything together.

My only wish is peace and security in our country and that every girl or woman can continue her education. I wish a day comes when there is no girl or woman illiterate. I was very young when I rode the bicycle when I began it as a hobby with my friends and then we moved to Kabul.

WION: How was your experience as a female cyclist who was passionate about the sport in a country like Afghanistan?

Rukhsar: I used to ride a bicycle in Kabul and one day a man shouted at me that the bicycle was not for me, a woman, it is only for a man. I got scared and left cycling for a while.

One day me and my friend, who is now in France, we decided to join a team. Then we joined a national cycling team but my family did not allow me to ride a bicycle because our culture doesn't allow that.

WION: How were your international encounters as a team and what do you plan for the future?

Rukhsar: In 2016 my teammates Masooma Alizadeh and Zahira Alizadeh participated and achieved second and third position. It was a big achievement for the federation and our country.

Right now they are in France, they got a scholarship from the International Olympics Committee for Olympic Games. About 50 female cyclists are registered in our federation from different provinces while only 12 of them are members of the national team. Out future plan for the federation is to develop the female team so they can participate in any competition.

WION: Afghanistan is mostly related with incidents of violence and terror. Is there a different face of the country that you see and would like to show the world?

Rukhsar: Afghanistan is a war-torn country where people have gone through wars for a very long time. Our country is known for violence, however, there are some positive and beautiful other versions of Afghanistan too.

Afghanistan is under development. People are getting educated, women have become stronger than before by participating in sports and working in great organizations.

Our men are growing with a broader-mindset and allowing their daughters and sisters to play their part in the country's progress. The young generation is taking over government as we see younger lawmakers and politicians in Afghanistan. Men and women have slowly and gradually become started sharing equal rights.

Afghanistan is becoming more beautiful since our historical places are preserved well for tourism, to name a few spots for instance Buddha of Bamyan province and Darul Aman Palace in Kabul. Things are changing in Afghanistan and I am sure one day, by God’s grace, Afghanistan will be among all other developed countries of the World.

WION: What are your personal views on the ongoing peace talks in Afghanistan especially in the light of the recent murderous attack on Women’s Rights activist Fawzia Koofi?

Rukhsar: The role of women in Afghanistan was limited in the past but now in the new era, girls are becoming more about their rights. We see a number of girls graduating from high schools and universities from all across the country. I belong to Ghazni province and it makes me happy to see a number of girls graduating from universities in Ghazni and the same are happening in other provinces of Afghanistan.

Our girls from different parts of the country are taking part in peace negotiations, in politics, sports, and working in well-known organizations of Afghanistan.

We see a great number of women in the cabinet as ministers. We have many women parliamentarians in Afghanistan who are actively taking part in law-making as well as reaching out to the people of Afghanistan. By God’s grace, soon all the rights of men and women in Afghanistan will be just and equal.