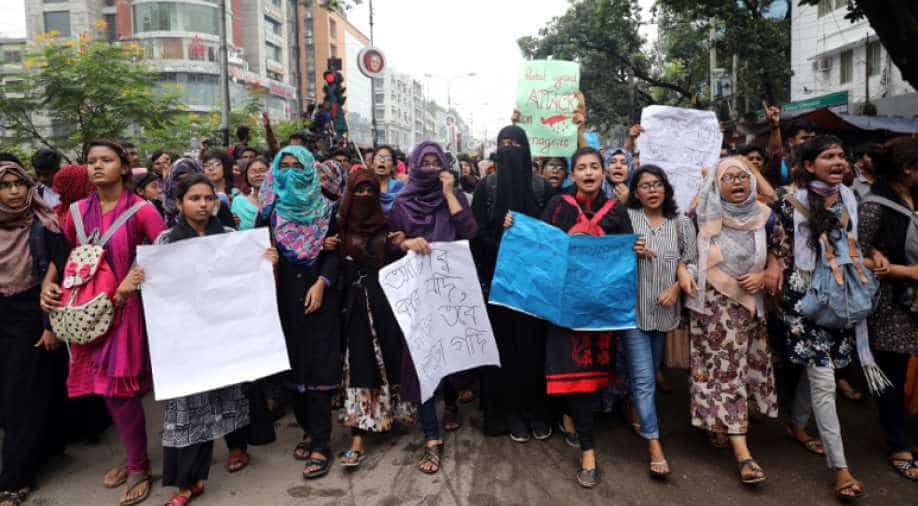 Students shout slogan during a rally as they join in a protest over recent traffic accidents that killed a boy and a girl, in Dhaka, Bangladesh. Photograph:( Reuters )

Days of protests over road safety in Bangladesh looked to be fizzling out Tuesday after around 150 people were injured in clashes with riot police and pro-government thugs wielding iron bars.

Nine days of protests saw tens of thousands of teenagers and students paralyse traffic in the capital Dhaka and beyond. Eight buses were torched and hundreds of vehicles vandalised.

Police responded with tear gas and rubber bullets while allegedly pro-government mobs attacked demonstrators, photographers and even the US ambassador's car.

Students said on Tuesday that many went back to school as they fear further government repression if the protests continued.

"We are panicked. We hear that some of the students who took part in yesterday's protests have been arrested," a private university student told AFP, speaking on condition of anonymity.

Another student, Ratul Abdullah, said four of his friends have been missing since yesterday.

"Today everything is normal. Students have returned to their classes," Mahbubur Rahman, head of Bangladesh's secondary and higher education authority, told AFP.

"So far no news of protests from any university," he said, adding that the authorities have shut down two universities in an effort to quell the protests.

Some 200 students at a state-run university in western city of Rajshahi, however, joined a march and rally, a student activist of the university said.

The protests, initially by high schoolers and then students, were to demand better safety on Bangladesh's chaotic and corruption-riddled transport network after a bus killed two teens on July 29.

At least 7,397 people -- around 20 a day -- died in road accidents last year, up nearly a quarter from 2016, according to the private Passengers Welfare Association.

At the height of the protests, hundreds of students were seen managing Dhaka's notorious traffic and checking whether cars and buses had valid licences and proof of roadworthiness.

On Monday, as students threw bricks at police using tear gas and rubber bullets, the government sought to quell the anger with promises of tougher sentences for dangerous driving.

Analyst Ali Riaz, a professor of Illinois State University, said the protests reflected broader issues including "the absence of accountability in governance and the absence of rule of law".

"Simmering discontent among the younger population about the direction of the country has surfaced through this movement. Their slogan, 'We want justice' is quite telling in this regard," he said.

"Whatever happens to the movement in the coming days, however, it ends, the younger generation has demonstrated that they can challenge the prevailing culture of fear their courage will have an indelible mark on the Bangladeshi society and politics," he said.

Rights groups have also called for the immediate release of Shahidul Alam, a renowned Bangladeshi photographer detained on Sunday night after comments on Al Jazeera and on Facebook about the demonstrations.

Alam, who authorities said was being questioned for "giving false information" and "provocative comments", said on Monday that he was beaten in custody.

"(They) washed my bloodstained punjabi (tunic) and made me wear it again," he said as he was taken into a Dhaka court.