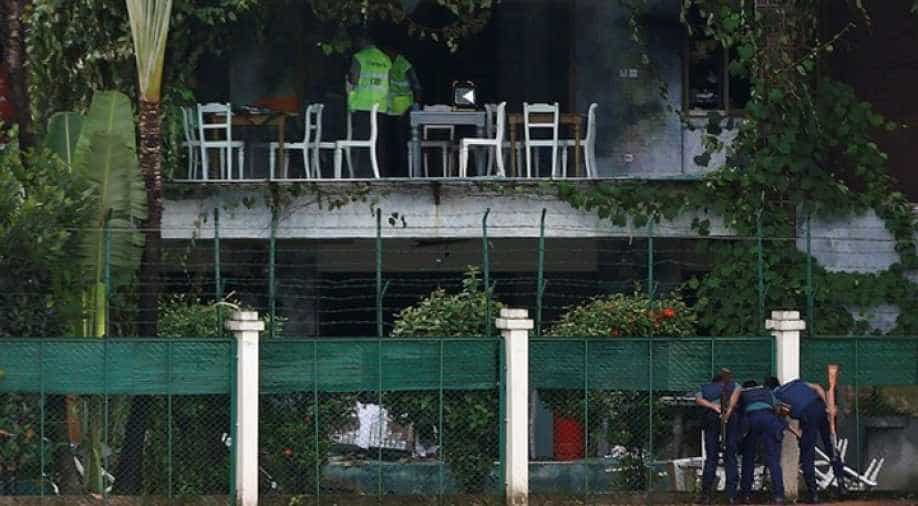 Policemen look inside the Holey Artisan Bakery and the O'Kitchen Restaurant in 2016 as others inspect the site after gunmen attacked, in Dhaka, Bangladesh Photograph:( Reuters )

Japan also wanted Bangladesh to share its findings from the investigation into the attack.

A Bangladesh court on Wednesday acquitted a British man detained without charge for two years on suspicion of involvement in a July 2016 attack on a cafe in Dhaka that killed 22 people, his lawyer said.

Rights group Amnesty International had campaigned for the release of Hasnat Karim, who was in the cafe at the time of the attack for his daughter's 13th birthday party.

"We are happy that the court accepted the charge sheet and dropped the charges against him," Karim's lawyer, Sanwar Hossain Somazder, told Reuters. Karim was due to be released from jail later on Wednesday.

Somazder said Karim would not be seeking compensation. "He lost two years from his life that will not come back," he said.

Karim was with his family celebrating his daughter's birthday when militants attacked, taking 22 hostages, mostly foreigners, who were killed over 12 hours.

Karim became a suspect after he agreed to act as a human shield, witnesses said at the time. An investigation later cleared him of involvement.

Separately a senior Japanese foreign ministry official said the Japanese government had requested Bangladesh to ensure the safety and security of its citizens in the future. Seven Japanese were killed in the 2016 attack.

Prime Minister Sheikh Hasina had ensured him that such an attack would not happen again in the future, Bangladesh sources said.

Japan has signed a $2.62 billion metro rail project in Dhaka in which it will invest $1.92 billion. But all its citizen pulled out of Bangladesh after the 2016 attack and work was stopped on the project for a year.

Osuga told reporters that the Bangladesh government had requested Japan withdraw its travel alert. But the Japanese government could not do this without further studying the situation.

Japan also wanted Bangladesh to share its findings from the investigation into the attack.