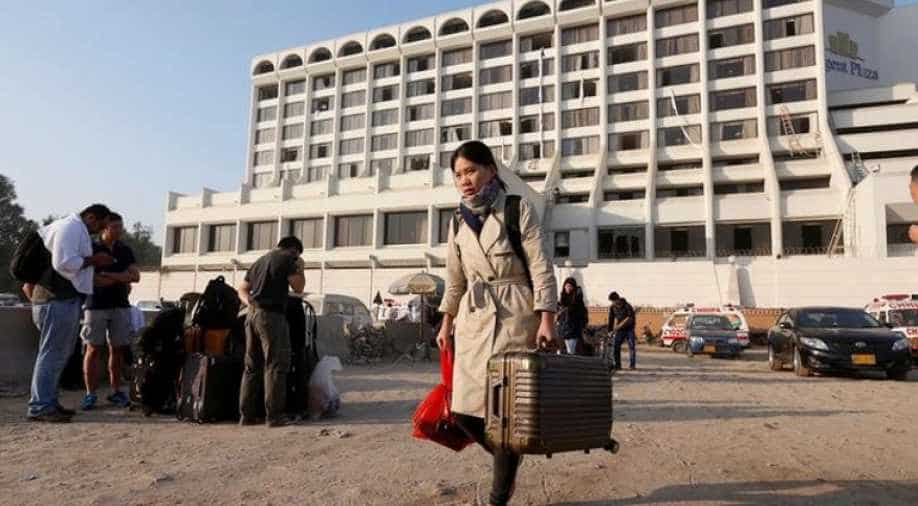 Video footage showed some hotel guests using a chain of bed sheets to climb down from windows of top floors as smoke filled the hotel. Karachi Mayor Waseem Akhtar told reporters the cause of the fire was not clear. Photograph:( Reuters )

A fire at a luxury hotel in the Pakistani city of Karachi killed at least 11 people on Monday.

"We have received 11 dead bodies and 75 injured," Dr Seemin Jamali, the head of emergency services at the Jinnah Postgraduate Medical Centre, told AFP, as reported by The Dawn.

The blaze broke out in a ground-floor kitchen of the Regent Plaza hotel and trapped guests in upper floors, the Dawn newspaper reported. The hotel has more than 400 rooms.

Video footage showed some hotel guests using a chain of bed sheets to climb down from windows of top floors as smoke filled the hotel. Dr Jamali told The Dawn that people had fractured bones frmo jumping out of hotel windows to escape the blaze, while others were hurt by broken glass and many were treated for smoke inhalation.

Karachi Mayor Waseem Akhtar told reporters the cause of the fire was not clear.

Many Pakistani buildings have lax health and safety standards, while the city's firefighters are often equipped with poor and inadequate equipment.

A Reuters cameraman said the fire had been contained by 9:30 am.

It is not clear if any of the victims were foreign tourists. Dr Janali told The Dawn that three foreigners were affected by the fire, but are in stable condition.

The Dawn quotes a survivor, Hamid Ali, as saying that he saw a man stand at a balcony waving for help, but the hotel didn't have any way to reach him. More, he said guests were sleeping when the fire broke out.

Chief Fire Office Tehseen Siddiqui told DawnNews that the fire wasn't intense, that "most people suffocated to death" because there was no exhaust inside. He said that smoke was circulating in the building because the air conditioning system stayed on.