Afghans bury victims of mosque attack as toll rises to 35 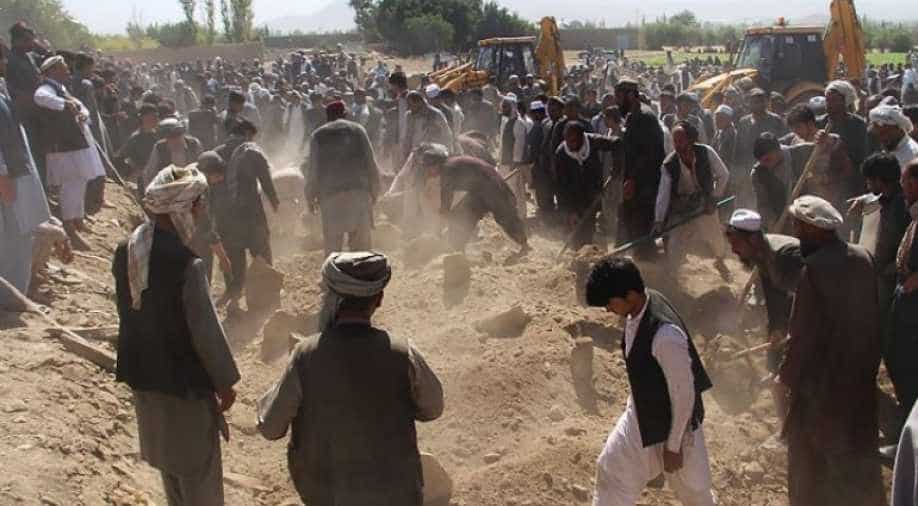 Afghan Shiite mourners cover the grave with soil after funeral prayers of 35 victims of a suicide attack in a Shiite mosque in Gardez of Paktia province on August 4, 2018. The death toll from a twin burqa-clad suicide blasts inside a Shiite mosque attack in eastern Afghanistan has jumped to 35, officials said on August 4. Photograph:( AFP )

The burqa-clad attackers shot at the mosque's security guards before opening fire on worshippers then detonating their explosives.

Hundreds of mourners Saturday buried the victims of a twin suicide attack on a Shiite mosque in eastern Afghanistan, as the death toll rose to 35, officials said.

Two suicide bombers dressed as women struck a Shiite mosque in Gardez, capital of Paktia province, Friday as it was crowded with worshippers for weekly prayers.

The burqa-clad attackers shot at the mosque's security guards before opening fire on worshippers then detonating their explosives.

Officials had earlier said 29 people were killed and more than 80 wounded.

"Today, we held a funeral ceremony and buried all the martyred of Friday's attack," a weeping Sayed Moharram, who lost his 16-year old son, told AFP from a graveyard on the outskirts of Gardez where hundreds of people attended the ceremony.

"It is very difficult for me to accept my son is no more with me," he said.

Haji Sultan, 70, who also attended the burials, accused the government of "negligence" in providing security for the Shiite minority.

"The enemies of Afghanistan want to create division by carrying out attacks on Shiite people, but they cannot win, it will further increase hatred towards the enemies," he said.

The Islamic State group, which in recent years has carried out attacks on Shiites in Afghanistan, claimed responsibility for the attack, the US-based SITE intelligence group reported, citing the IS propaganda channel Amaq.

"Around 150 Shiites and security force members were killed and wounded yesterday in an attack that targeted a place of worship for Shiites in the town of Gardez in Paktia in the east of Afghanistan," Amaq reported.

The attack comes as urban areas across Afghanistan have been rocked by a surge in violence in recent months, with both Islamic State and Taliban insurgents targeting security forces and government installations.

The Taliban had not claimed a major attack in a city for weeks as they come under increased pressure to agree to peace talks with the Afghan government.

But IS has carried out multiple attacks in the eastern city of Jalalabad and the capital Kabul in recent months, targeting everything from government ministries to a midwife training centre.

Last month an IS suicide bomber blew himself up near Kabul international airport, killing 23 people including AFP driver Mohammad Akhtar.

The uptick in violence comes as US and Afghan forces intensify ground and air offensives against IS, and the Taliban step up their turf war with the group.

Earlier this week more than 150 IS fighters surrendered in northern Afghanistan -- in a move that Afghan security forces and the Taliban hailed as the end of the extremist group in the north of the country.