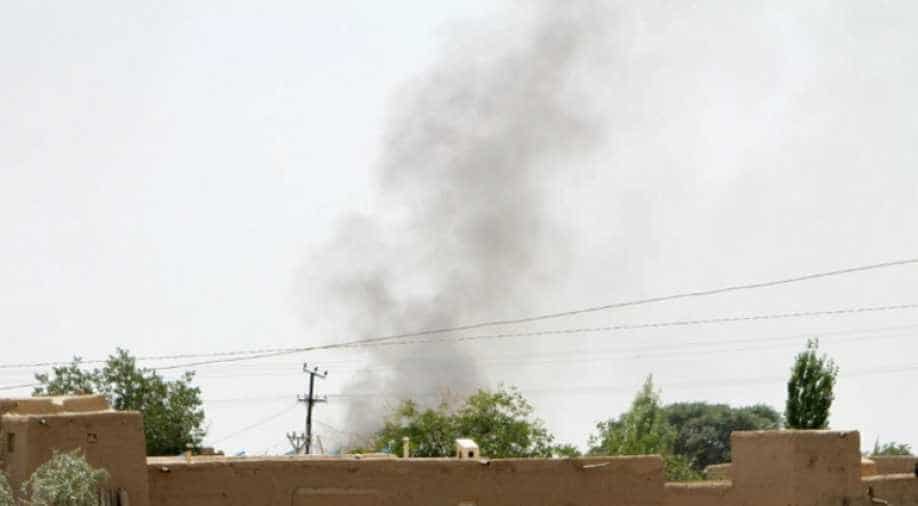 Smoke rises from a residential area where gun battle is going on between Taliban and Afghan forces in Ghazni province, Afghanistan. Photograph:( Reuters )

Afghan special forces units moved to embattled Ghazni overnight to try to beat back Taliban insurgents who have come close to overrunning the city as public anger mounted over the government's response to the crisis.

The attack on Ghazni, a strategic centre on the main road linking the capital Kabul with southern Afghanistan, has come as a severe blow to President Ashraf Ghani and dampened hopes of a possible start to peace talks with the Taliban.

Diplomats in Kabul said the government had admitted being taken by surprise by the attack and after 72 hours with minimal public comment from the presidential palace, Ghani announced on Twitter that reinforcements would be sent to the city urgently.

Afghan officials said US special forces units were on the ground helping to coordinate air strikes and ground operations but there was no confirmation from US military headquarters in Kabul.

Three days after the insurgents launched an assault in the early hours of Friday, news from Ghazni remains patchy and incomplete with communications badly hit after most of the city's telecoms masts were destroyed in the fighting.

About 100 soldiers and police have been killed and many wounded, according to one security official who said casualties on the Taliban side have also been heavy, including about 50 fighters killed by an air strike as they were waiting for food late on Sunday.

The number of civilian casualties is not known but witnesses who have reached Kabul have reported seeing many bodies in the streets.

Officials at the interior ministry said at least 15 civilians had been killed and more than 400 wounded in the fighting. More than 45 wounded members of the Afghan armed forces had to be airlifted out in the last 48 hours.

The attack on Ghazni, the heaviest blow struck by the Taliban since they came close to overrunning the western city of Farah in May, dampened hopes of peace talks which had grown since a surprise three-day truce during the Eid al-Fitr holiday in June.

Officials in Ghazni have warned for months that the city could fall and public reaction has been bitter with radio call-in shows and social media flooded with comments denouncing the government.

"The whole of Ghazni province is on fire. President Ashraf Ghani must resign!" read a typical comment on Facebook.

Officials said Taliban fighters were installed in residential areas, knocking down walls to make movement easier and making it difficult for security forces to hit them for fear of harming civilians.

"The militants know our forces will not attack civilians so they are using young men as human shields to walk around the city and set buildings on fire," said one official in Kabul.

The insurgents had also seized control of the districts of Khawaja Omari, north of Ghazni city and Ajrestan, in the west of the province with officials saying dozens of Afghan security forces either killed or missing.