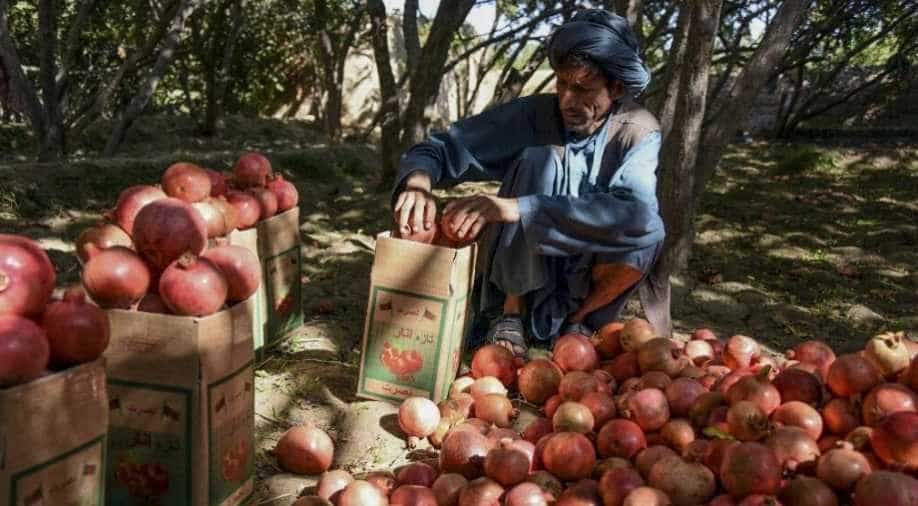 A farmer sorts and packs pomegranates at a garden in Kandahar province. Photograph:( AFP )

The prized crimson fruit is a point of pride for Afghan farmers, particularly in Kandahar province, where luscious pomegranates the size of small melons dangle from trees.

Pomegranate farmers in southern Afghanistan -- where growing the juicy fruit is an important alternative to opium poppy production -- say they are feeling the squeeze this year, with business blemished by chilly weather, pests and export woes.

The prized crimson fruit, globally renowned for its reputed health benefits, is a point of pride for Afghan farmers, particularly in Kandahar province, where luscious pomegranates the size of small melons dangle from trees.

But some Kandahar farmers say a fungal infection and destructive insects are taking a bite out of this season's harvest, and they accuse neighbouring Pakistan of new tariffs that are hurting the export market.

Haji Abdul Manan, who has been growing fruit in southern Kandahar for about 30 years, said a springtime cold snap damaged pomegranate flowers, impacting about 40 per cent of his crop.

Problems also came from "lice, flies and a fungal disease," he added, likening a type of greenfly to a natural disaster that had ruined more than 100 of the orb-shaped fruits daily.

"It is the duty of the Afghan government to spray all the gardens in Kandahar and to protect the pomegranates from diseases, but the government is not doing anything," Manan complained.

Apart from its sweet flavour, fans point to pomegranates' purported health benefits including high levels of vitamin C and antioxidants that are said to help protect the body.

In Kandahar, a medium-sized pomegranate goes for the equivalent of about 15 US cents, but by the time the fruit reach Kabul, they cost about three times that.

Zaheer and several other farmers claimed Pakistan has this year imposed hefty tariffs on pomegranate imports which, despite a drop in yield in some parts of Afghanistan, has led to an oversupply in the domestic market and sharp price drops.

"It is not fair to increase it," Zaheer said. "That is why it is the traders are facing harm."

But the Pakistan embassy in Kabul denied such a drastic measure had been taken, saying Pakistan had raised duties only slightly because "Afghan exporters consistently understate the value of pomegranates and fruits".

Muhammad Hafeez, a fruit and vegetable seller at a market in Islamabad, said pomegranate supply from Kandahar had not been impacted.

"The supply is in bulk and the quality is good," Hafeez told AFP.

Abdul Baqi Beena, deputy director of the Kandahar chamber of commerce, said about 40,000 to 50,000 tonnes of pomegranates were exported annually, including to India, Pakistan, the United Arab Emirates and Saudi Arabia.

For years, Afghanistan and international donors tried to wean farmers from growing opium poppies by encouraging alternatives such as fruit crops.

But those efforts often failed as drug smugglers offered lucrative prices that normally far exceed the income from traditional agriculture.

The US Agency for International Development previously supported the farming of high-value crops, including pomegranates, as an alternative to opium production, but in recent years has shifted its focus to helping build export markets and supporting Afghan farmers that way.

"These include pomegranates, pine nuts, apricots, spices, gems, marble, and carpets, among others."