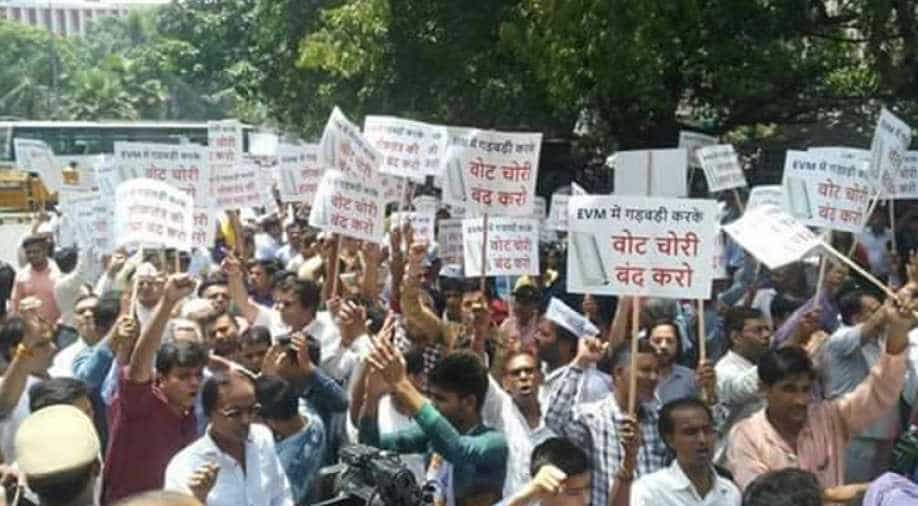 AAP workers demonstrated outside the Election Commission headquarters in New Delhi on May 11. Photograph:( Twitter )

The protesters, including AAP MLAs and newly appointed Delhi convener Gopal Rai, alleged that the manipulation of electronic voting machines was killing democracy.

"EVM manipulation is a real possibility and should be looked into immediately," said RK Gupta, an AAP worker who had come from Dwarka in South West Delhi to the poll panel's central Delhi headquarters.

"This is how BJP won polls in Uttar Pradesh and Uttarakhand. Even the division along caste lines could not have helped them with such a huge victory," added Pragati, another worker, who had come from Mundka near the city's western border.

Apart from demanding that VVPAT-equipped EVMs be used, the party plans to approach the Election Commission with the request that votes registered in EVMs and paper trails of 25 per cent randomly chosen booths be tallied.

VVPAT-equipped EVMs dispense paper slips which help voters confirm that their vote has indeed gone to the candidate of their choice.

Participating in a discussion on the issue during a day-long special session of the Delhi Assembly earlier this week, Bhardwaj claimed that a voting machine could be manipulated by simply feeding it with a "secret code".

Using what his party claimed was a prototype EVM developed by a group of IITians, Bhardwaj, himself an engineer, showed how it could be tampered with to favour a particular candidate.