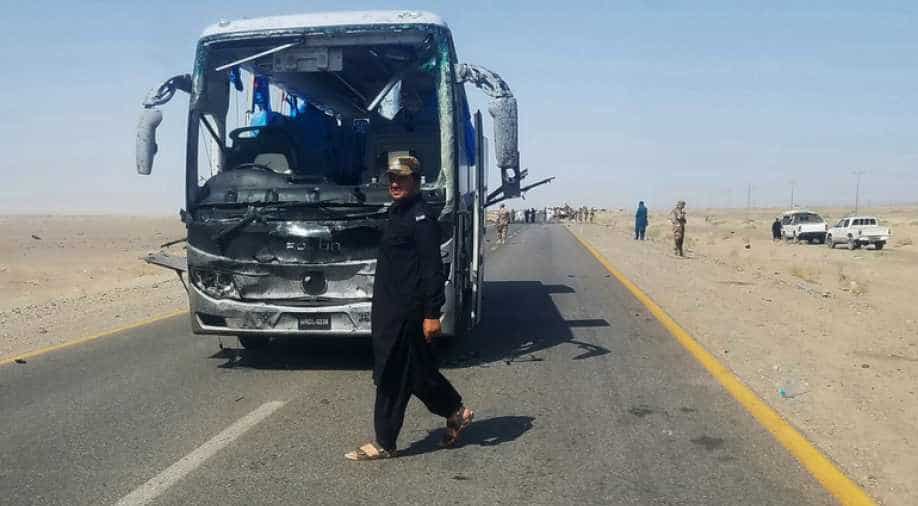 A Pakistani security personnel walks next to a damage bus, which was carrying Chinese engineers, after a suicide attack in Dalbandin region. Photograph:( AFP )

At least thirteen Chinese engineers were injured in a suicide attack targetting a bus in Dalbandin region of Pakistan news agency ANI reported.

On Saturday a bus carrying Chinese engineers was attacked while it was on its way of Balochistan province after an attacker with explosives in his truck detonated himself when their bus came close to his truck.

Besides from Chinese engineers, bus driver and two paramilitary soldiers were also injured in the attack.

However, all of them suffered little to moderate injuries and are in stable condition now.

Earlier there were reports of six people getting injured.

No casualty was reported.

Baluchistan, which has rich mineral and natural gas reserves but remains Pakistan's poorest province, is the site of a long-running rebellion by separatists who argue the state is taking over their lands and have targeted Chinese-funded projects.

The Chinese workers targeted in this attack worked on the Saindak mining project, which is controlled by Chinese state-owned Metallurgical Corporation of China (MCC), according to a senior official who works for MCC. Eighteen Chinese workers were on the bus when the attack happened.

Tens of thousands of Chinese workers are living in Pakistan and most work on infrastructure projects that fall under the Beijing-funded $57 billion China-Pakistan Economic Corridor (CPEC), a key leg in China's vast Belt and Road initiative to build transport and economic links across Asia and beyond.

Meanwhile, Chinese officials have urged Pakistan to improve security in Baluchistan, which houses a vital seaport being built by China in the coastal city of Gwadar, and has a key road artery passing through it as part of the CPEC transport corridor.