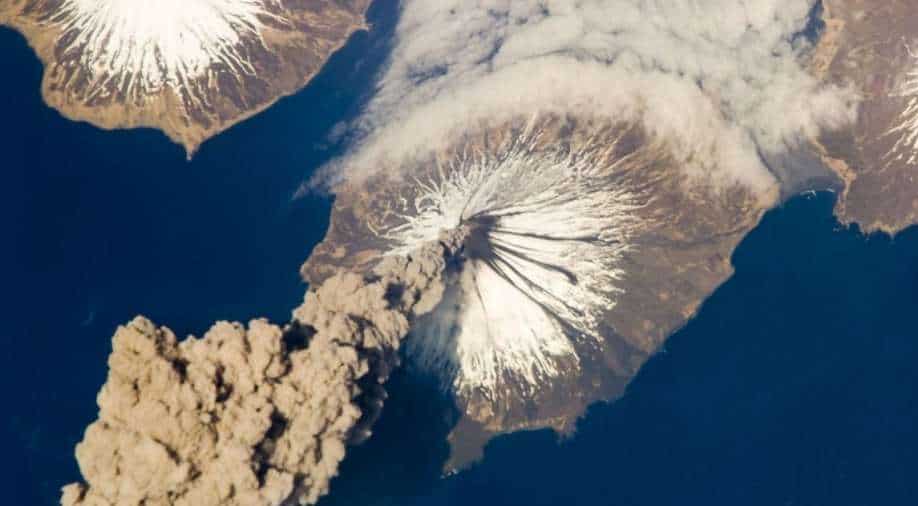 Plume from Mount Cleveland as seen from the International Space Station Photograph:( Others )

As per their predictions, Alaska's Aleutian Arc, the line of islands stretching across the Bering Sea towards Russia's coast, could be harbouring a monster on the scale of Yellowstone's mighty supervolcano

Mount Cleveland seems as though the sort of fountain of liquid magma you made for an evaluation four science venture and loaded up with vinegar and bicarb. More topographical zit than liability, it pops and overflows each decade or so to thicken its volcanic skin.

There are five more like it close by, making up what's known as the Islands of Four Mountains. Geologists currently dread that an archipelago of volcanic islands off Alaska may, indeed, be one monster unfamiliar supervolcano like Yellowstone, with possibly sensational and worldwide outcomes should it eject.

Diana Roman of the Carnegie Institution for Science in Washington, DC and her associates are because of present their examination at the American Geophysical Union (AGU) 2020 Fall Meeting.

As per their predictions, Alaska's Aleutian Arc – the line of islands stretching across the Bering Sea towards Russia's coast – could be harbouring a monster on the scale of Yellowstone's mighty supervolcano.

The entire chain contains around 80 volcanos in total. Dozens of them have erupted repeatedly in recent history, too, so it's no secret that it's a geologically active part of the planet.

Their investigations of the seismicity, confined topography, structure, and warm and gas emanations of Mount Cleveland and five comparative measured volcanoes in the region, recommend something evil and underground might be prowling in the far off waters of Alaska's Aleutian Arc.

Primer information show the expected presence of a huge caldera, or imploded part of the Earth's outside layer which falls into an exhausted magma chamber, underneath the six stratovolcanoes are Carlisle, Cleveland, Herbert, Kagamil, Tana and Uliaga.

This sort of breakdown can make a sort of weight cooker impact, as the magma chamber steadily tops off over the long run, yet with a fundamentally diminished all out chamber volume. Geologists additionally speculate that the arrangement and direction of the mountains may demonstrate a caldera.

"We've been scratching under the lounge chair pads for information," Roman says. "Yet, all that we take a gander at lines up with a caldera in this area."

In the event that her and her group's doubts and examination demonstrate right, it would imply that Alaska additionally harbors a ticking volcanic delayed bomb on a comparable scale to Wyoming's Yellowstone supervolcano, the subject of much prophetically catastrophic conversation in its own right.

The Frozen North's Aleutian Arc chain of islands contains about 80 abundances of fluctuating size, many which have ejected over and again in late memory, among them mount Cleveland, which has emitted multiple times over the most recent 200 years.

Alone, it has consistently delivered debris mists that ascent some 4.5 to 9 km (15,000-30,000 feet) above ocean level, however should a supervolcanic ejection happen, it would probably affect worldwide air travel to a phenomenal degree.

A 1944 emission at the mountain was delegated a 'calamitous' level three occasion as indicated by the volcanic explosivity record (VEI).

Then, bigger occasions on the VEI scale can have worldwide results, with the ejection of the Okmok well of lava in the Aleutian Arc conjectured to have added to the possible defeat of the Roman Empire more than 2,000 years prior.

Scientists are planning to lead a more top to bottom investigation of the territory around the Islands of the Four Mountains, including ocean bottom and geographical examinations just as seismic and gravitational information assortment, to improve comprehension of the potential danger presented, both to North America and the world on the loose.

"It does conceivably assist us with understanding what makes Cleveland so dynamic," says lead creator John Power, an analyst with the US Geological Survey at the Alaska Volcano Observatory.

"It can likewise assist us with understanding what sort of emissions to expect later on and better plan for their dangers."