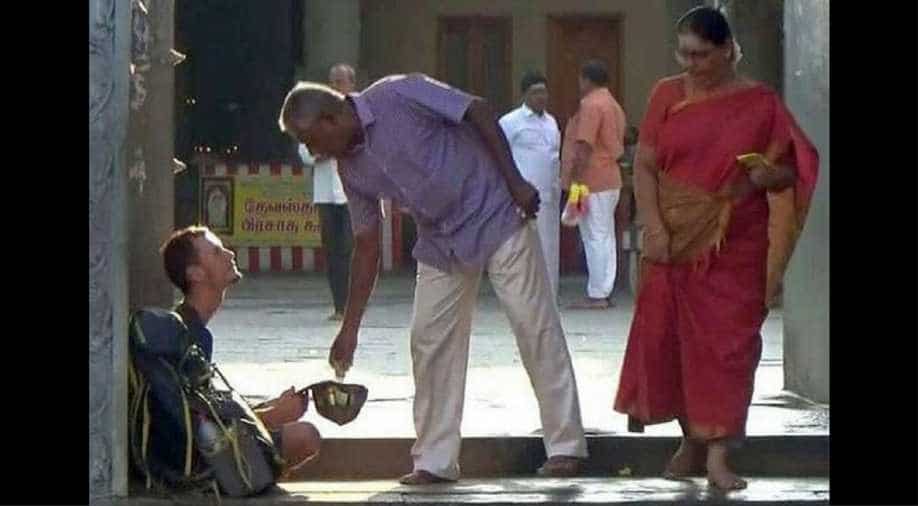 The Russian tourist sat begging at the entrance of the Sri Kumarakottam temple in Kancheepuram in Tamil Nadu. Photograph:( Twitter )

A 24-year-old Russian tourist was recently spotted begging at the entrance of the Sri Kumarakottam temple in Kancheepuram in Tamil Nadu when Sushma Swaraj, the Minister of External Affairs came to his help.

The Russian identified as A. Evangelin, according to a report published by The Hindu, has a valid passport and visa but met with an unfortunate incident when his ATM pin got locked. He came to India on September 24 and arrived in Kancheepuram on October 12 from Chennai.

After reaching the town, Evangelin took a tour of the city, visited a few temples before heading to an ATM to withdraw cash. But while he was withdrawing, his ATM pin got locked and he had no money to travel further.

According to a police officer as per the report, "With his ATM pin locked, he decided to beg at the temple entrance for some money."

The officer added, "We checked his travel documents, passport and visa. All documents are perfectly valid. He had spent all his money and was not sure how to reach Chennai."

The Siva Kanchi police even gave him Rs. 500 and put him on a train to Chennai.

On reading this news, Sushma Swaraj came to the Russian tourist's rescue and tweeted.

Evangelin - Your country Russia is our time tested friend. My officials in Chennai will provide you all help. https://t.co/6bPv7MFomI

Evangelin reportedly did not answer the phone call from the consulate but will be helped at the earliest.