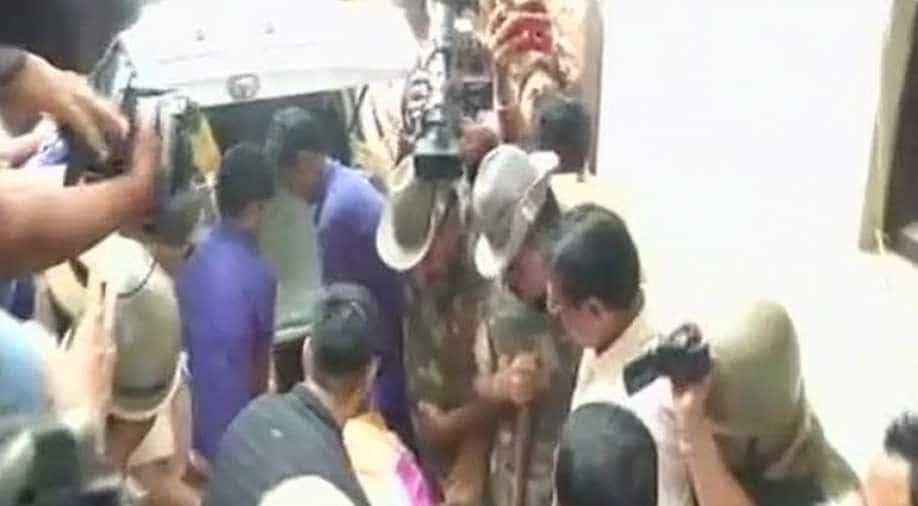 The godman was arrested from a government hospital in Rajasthan's Alwar where was hospitalised. Photograph:( ANI )

The 21-year-old from Chhattisgarh's Bilaspur had lodged a complaint against the Rajasthan-based godman, accusing him of sexual exploitation

Self-styled godman Kaushalendra Prapannacharya, popularly known as Phalahari Maharaj, was arrested on Saturday from Alwar in Rajasthan for the allegedly raping a 21-year-old disciple.

The woman from Chhattisgarh's Bilaspur had lodged a complaint against the Rajasthan-based godman, accusing him of sexual exploitation. The First Information Report was filed in Alwar but was later transferred to Chhattisgarh.

The young woman alleged she had been raped by godman at his ashram in Alwar on August 7. Her family, which claimed to have given large donations to the Baba, has been his follower for over 15 years.

Phalahari Maharaj is accused of rape and criminal intimidation, a top police official from Alwar said.

The Rajasthan Police police arrested the 70-year-old after three days of investigations.

The godman was arrested from the government hospital, where he had got himself admitted amid tight police security following the accusations of sexual assault. Doctors found him fit and he was shifted to a private ward on Friday.

Police has sealed the godman's room, in front of which he would sit on a throne and deliver his sermons.

The case follows the conviction of Haryana-based Dera Sacha Sauda chief Gurmeet Ram Rahim Singh last month for the rape of two of his female devotees.