Rahul demands explanation from PM on road construction by China 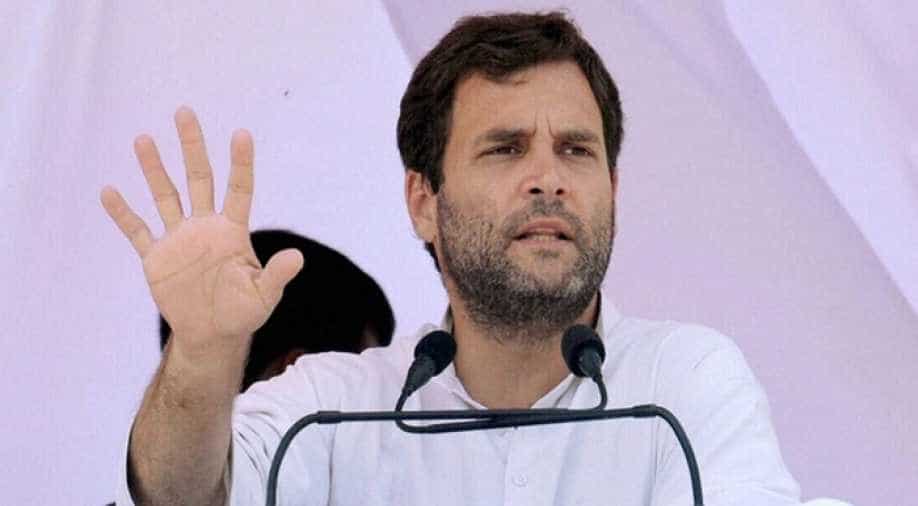 Rahul asked Prime Minister Narendra Modi to tell the country what was happening at Doklam and about his policy on the issue. Photograph:( Zee News Network )

The Congress today asked Prime Minister Narendra Modi to tell the country what was happening at Doklam and about his policy on the issue with Rahul Gandhi taking a swipe at him demanding an explanation on road construction by China if he was done with "chest thumping".

Congress spokesperson Kapil Sibal asked Modi to explain his policy to deal with the issue and whether he intended to invite Chinese President Xi Jinping to Sabarmati again.

The comments came a day after sources said China maintained a sizeable presence of troops near the site of the Dokalam standoff with India and had started widening a road, around 12 km from the area of conflict.

"Modiji, once you're done thumping your chest, could you please explain this?" Gandhi tweeted, tagging a news report headlined, "With 500 Soldiers On Guard, China Expands Road In Doklam".

At the AICC briefing, Sibal said, "Your (Modi's) meeting was good, but what was the result of it and what is happening about it. Please tell the country as to what is happening at the border, especially along the Dokalam plateau."

"What is going to be your policy in this regard and whether you will again invite President Xi to Sabarmati for a swing with him and have a good sleep," the former minister asked.

Sibal asked what was happening in Dokalam today and said it is "very disappointing" that Modi met Xi at the BRICS Summit and there was a lot of talk about the meeting that would help ease the border tension with China as Chinese troops had withdrawn and so had India, removed their equipment and this matter will not be escalated further.

"But what we are hearing now is that in the Dokalam plateau near the trijunction and 10 km within the chicken neck, a new road is being constructed and the same equipment is being used there. Reports also say that some 500 to 1,000 Chinese soldiers are also deployed there," he said.

The Congress leader also referrd to the statement of Army Chief Gen Bipin Rawat who said that the Chinese will be doing excursions and "we should be ready for that".

Troops of India and China were locked in a 73-day standoff in Dokalam that began from June 16 over road construction activity at the India-Bhutan-China trijunction.

The tension eased after talks between top officials of both the countries.

The Congress, in an article put out on its website, also said that the fresh Dokalam development underscores that deft diplomacy was not practiced and requires an explanation from the government.

The article said the news that China has stationed over 1,500 troops in close proximity to the standoff zone makes warnings given out by Congres leaders earlier sound prophetic.

"In the absence of the NDA government not clarifying particulars as to the de-escalation, this fresh development looks alarming and underscores that deft diplomacy was not practiced," the article said.

It said that Indian surveillance has reportedly detected new bunkers, and some road re-laying has also been done in the vicinity. China is reportedly using the road construction materials it brought to Doklam, to strengthen infrastructure in the environs of the standoff zone.

The Congress said it is widely evident that a build-up of roads and bunkers is a step towards China's stated goal to "exercise its sovereign rights" in the region.

It said Army Chief Rawat has termed these as 'salami slicing tactics' and warned that continued tensions may snowball into a larger conflict.

In military parlance, 'salami slicing' is a series of many minor actions, often performed by covert means, that as an accumulated whole produce a much larger result that would otherwise be difficult to execute all at once.

The Congress article said in September, China also opened a strategic highway to Nepal via Tibet and China's state-run Global Times alarmingly stated that this highway is just a "forerunner" to a railway link.

It said as per a recent report, China is reinforcing its claim on the Doklam territory by upgrading the road around 10- km north and east of the earlier face-off site.

"One cannot be sure whether these events had been discussed on the table during the standoff. If it is so, then a legitimate question arises, what all concessions have the government made to the Chinese to solve the crisis?

"Is this just the tip of the iceberg? If instead, the government is getting cold feet, then China's salami tactics are working," the article said.