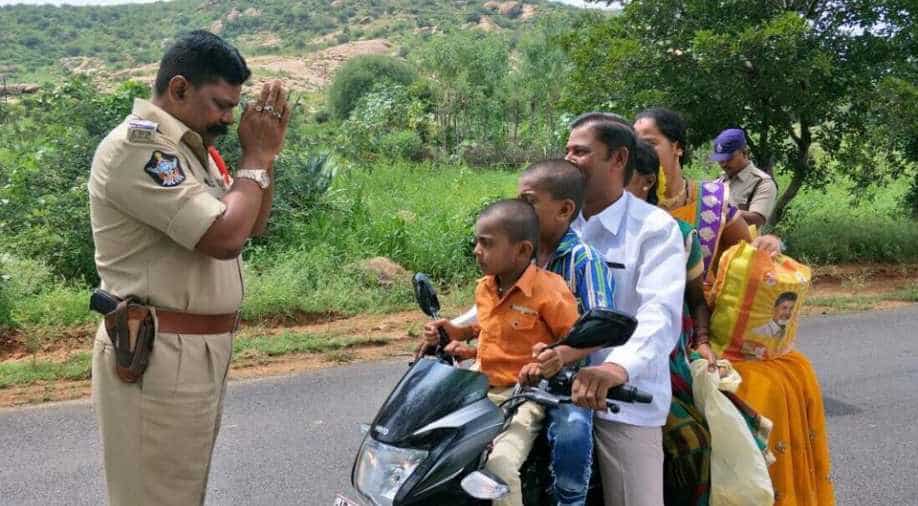 The photo, taken in Andhra Pradesh?s Anantapur, shows the policeman pleading as the man sits on the motorcycle with four family members riding pillion. Photograph:( Twitter )

A photograph of a policeman standing with folded hands in front of a man and his family of four on one motorcycle went viral on Twitter on Tuesday.

The photo shared on Twitter was taken in Andhra Pradesh’s Anantapur.

The photo was tweeted by Abhishek Goyal, an IPS officer of the Karnataka cadre, at 7 am. In his tweet, Goyal said, “What else can he do? We always have a choice...choose the safe one!”

We always have a choice .. chose the safe one ! #BeSafe pic.twitter.com/noLHyAMqBn

The officer in the picture has been identified as B Shubh Kumar of Anantapur’s Madakasira Circle, according to a report in the Indian Express. Kumar was headed to work when he saw the man, K Hanumantharayudu, on a bike with his two sons sitting on the fuel tank, his wife and a relative behind him.

Kumar was finishing his work -- a 1.5-hour long programme on road safety, that the family in question had also attended.

As reported by Indian Express, Hanumantharayudu was a repeat offender and had been warned on several occasions.

Kumar said, “My mind went blank when I saw the five of them riding so dangerously and all I could do was fold my hands in total resignation, helplessness and frustration. I asked him to think of the safety of his family as he did not have a minimum sense of responsibility towards them. As the two kids were sitting on the fuel tank, he had little room to manoeuvre because their legs were stuck to the handlebar. Accidents happen like that only,”

When confronted by Kumar, Hanumantharayudu smiled at the inspector.