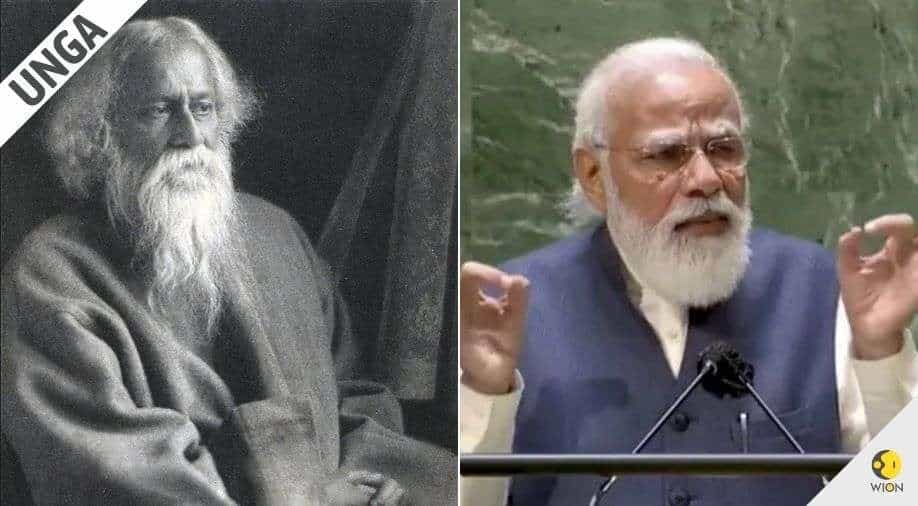 PM Modi quoted Tagore’s lines which were written by the poet in 1937 upon request of  Shyamaprasad Mukherjee, the then minister of industry and supply.

Mukherjee had requested Tagore to compose a song for the celebrations of the Foundation Day of the Calcutta University which was observed on February 27, 1937. While the university chose another song by Tagore, this song quoted by Modi "Shubho kormopothe" became immensely popular in no time.

The lines quoted by PM Modi loosely translate to "Boldly proceed on your path of good deed, may you overcome all weaknesses and doubts."

Modi narrated these lines in the UN General Assembly as he believes that the lines are relevant to all responsible countries and the United Nations.

"In the context of the current times, this message is relevant to all responsible nations," Modi said.

"I am confident that our efforts will enhance peace and harmony in the world and will make the world healthy, safe and prosperous," he said.

He also stressed on the importance of nurturing a democracy, that India has been able to successfully achieve. "Yes, democracy can deliver. Yes, democracy has delivered. Today is the birth anniversary of Pandit Deen Dayal Upadhyaya, the proponent of 'Ekatma Manav Darshan', meaning integral humanism or the development journey taken together, the expansion from self to universe," he said.

Talking about growing terrorism around the world, especially after the Afghan-Taliban crisis, PM Modi pointed out that nations with "regressive thinking" are trying to use terrorism as a "political tool" and these countries should understand that terrorism is an equally dangerous threat for them too.