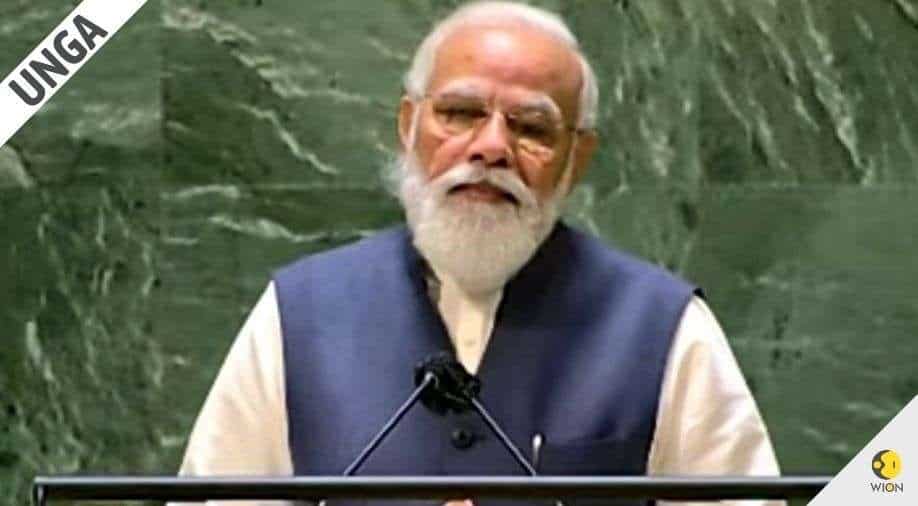 If electric current is produced by a renewable source, for instance, solar PV or a wind turbine, the clean hydrogen produced is known as green hydrogen

Addressing the world leaders at the 76th session of the United Nations General Assembly in New York on Saturday, Prime Minister Narendra Modi announced that India is moving towards 450GW renewable energy.

"India to become the world's biggest Green Hydrogen hub. We are answerable to future generations with our decision making," said PM Modi.

It is the hydrogen fuel that is created using renewable energy instead of fossil fuels. Hydrogen can also be produced by the electrolysis of water, which is using an electric current to break water.

If this electric current is produced by a renewable source, for instance, solar PV or a wind turbine, the clean hydrogen produced is known as green hydrogen. Also, if renewable energy is used to generate electricity for the electrolysis of water then the green hydrogen can be generated without any harmful emissions.

Hydrogen, on Earth, does not appear pure in nature and requires energy to separate. The most common technique is to extract hydrogen from water.

This is done by using heat and chemical reactions to release hydrogen from organic materials such as fossil fuels.

However, this can be enormously polluting. Worldwide hydrogen production is responsible for CO2 emissions, which are equivalent to that of the United Kingdom and Indonesia combined.

There is a cleaner way of getting hydrogen, which is, through electrolysis.

Hydrogen atoms form hydrogen molecules and oxygen molecules pair up too. Each can then be bottled up. If the electricity is generated from renewable sources such as solar or wind, the production of hydrogen in this way emits no greenhouse gasses. Also, this is how different shades of hydrogen are created. These include brown hydrogen, grey hydrogen, blue hydrogen, and green hydrogen.

While conventional hydrogen and blue hydrogen cost about $2 per kilogram, green hydrogen is around twice as much.

That price, however, is falling steeply with renewable energy prices and cheaper costs to make equipment used for electrolysis, called electrolysers.

An Australian National University report last year estimated Australia could currently produce green hydrogen at about $3.18-3.80 per kg and at $2 per kg by the end of the decade.

At that price, it would be cost-competitive with fossil fuels, experts say.