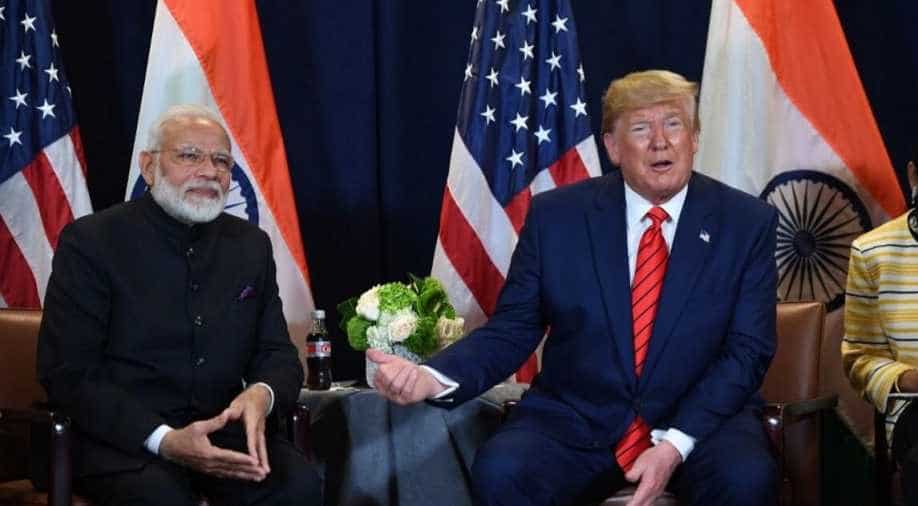 In the third US-India bilateral meeting between India and the US this year on the sidelines of UNGA, US President Donald Trump and Prime Minister set a trade target of $60 billion. Describing Modi as the ''Elvis of India'', referring to famous American singer and actor, the US President praised Modi for giving a ''loud and clear'' message to Pakistan during the ''Howdy, Modi!'' event. Trump hinted at potential trade deal during the bilateral. He called PM Modi, 'Father of India' Photograph:( AFP )

Trump India visit: Just before his departure to India, Trump said that he was looking forward to being with 'millions and millions of Indians waiting to welcome me''.

The stage is set for US President Donald Trump's first visit to India. Trump is expected to touch down at Ahmedabad Airport in a few hours from now.

Just before his departure to India, Trump said that he was looking forward to being with 'millions and millions of Indians waiting to welcome me''.

Prime Minister Narendra Modi tweeted a welcome message for Trump ahead of his arrival. Modi will personally be present at the Sardar Vallbhai Patel International Airport to receive Trump.

Departing for India with Melania! pic.twitter.com/sZhb3E1AoB

Meanwhile, multi-tier security arrangements have been made for the 'Namaste Trump' event to be held in Ahmedabad. More than 4000 security personnel have been deployed along with 10 companies of paramilitary forces. Hundreds of artists from across the country preparing for a grand welcome for President Trump.

Watch: Preparations for 'Namaste Trump' in the final stage

Meanwhile, the national capital will be on high alert once Trump reaches New Delhi. An anti-drone team of the National Security Guard (NSG), snipers and elite commandos have been deployed to secure the area around the ITC Maurya Hotel where the president will be staying during his visit.

Police personnel from six districts and 40 companies of the CRPF will form a joint force that will look into the security of the capital. The local administration is looking to acquire additional CCTV cameras to monitor the area.

It is an honour that he will be with us tomorrow, starting with the historic programme in Ahmedabad! https://t.co/fAVx9OUu1j

The route from the ITC Maurya to the Delhi government school which first lady Melania Trump is scheduled to visit will also be under high security.

Prime Minister Modi will leave shortly for Ahmedabad, which is the first stop of US President Donald Trump`s first official trip to India.