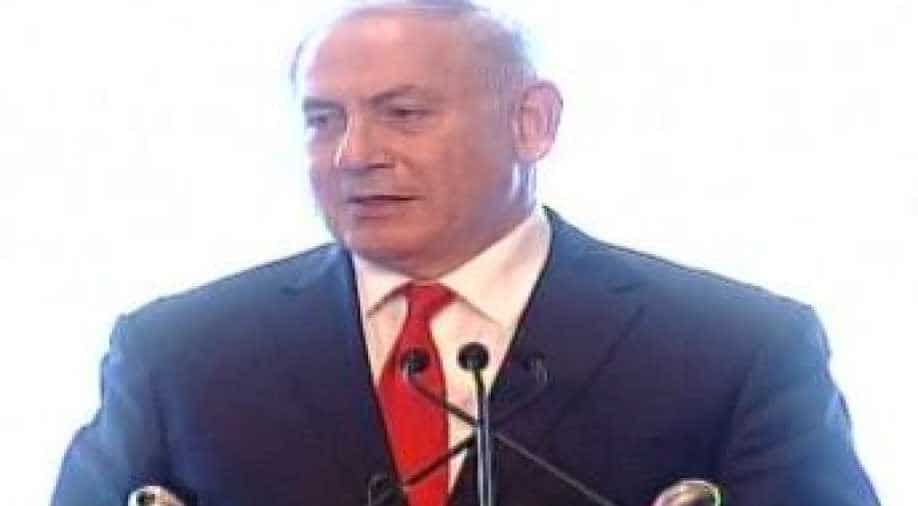 Netanyahu is in India on a six-day visit. Photograph: ANI

'The main job of both India and Israel is to cut this bureaucracy so the firms can go on with their business of doing business,' he added

Your (PM Modi) visit to Israel broke ground, your were the first leader of India to come to Israel in 3000 years, hope it will not take long for your next visit. I want to tell you that we believe in India as you believe in Israel: Israel PM Benjamin Netanyahu in Delhi pic.twitter.com/e8aP5mu19y

The alliance of democracies is important to secure our common future, I believe possibilities are endless. In this visit, we have discussed how we can strengthen our two nations in civilian, security and in every area, says Netanyahu

The alliance of democracies is important to secure our common future, I believe possibilities are endless. In this visit, we have discussed how we can strengthen our two nations in civilian, security and in every area: Israel PM Netanyahu in Delhi pic.twitter.com/rGEMxMVrZW

Democracies bind and connect to each other in natural ways. I saw sympathy and friendship of people. When I walked in streets of India, just like in Agra, someone said to me, we are so happy that you are friends with our PM, we are friends with you & Israel: PM Netanyahu pic.twitter.com/LwmIoS6IuT

India is one of the world's most populous democracies, it's a place that shows humanity can be governed with freedom, that we can secure rights of people, ability to think, speak & believe what we want, society is pluralistic and diverse, free like Israel, says Netanyahu

If you want to be an economic power, you must reduce and simplify taxes and must cut bureaucracy, says Netanyahu

The main job of both India and Israel is to cut this bureaucracy so that firms can get on with their business of doing business, he adds

I was astounded to know that PM Modi has moved India in the scale of ease of doing business 42 places in three years: Israel PM pic.twitter.com/jxgofsVpVN

Our first requirement, from the time of our first PM, was to achieve the minimum strength required to assure our existence, says Netanyahu

"The weak don't survive, the strong survive, you make alliances with the strong, you are able to maintain peace by being strong," says Israeli PM Benjamin Netanyahu at Raisina Dialogue in New Delhi.

Presentation of concluding report of India-Israel CEOs Forum in Delhi.

India-Israel Innovation Bridge will act as link between Start-ups of the two sides. I have been saying that Indian Industries, start-ups & academic institutions must collaborate with their Israeli counterparts to access the huge reservoir of knowledge: PM Modi #NetanyahuInIndia pic.twitter.com/FiWNa131Ge

Today we have emerged as the 6th largest manufacturing nation but we are not done yet: PM Narendra Modi #NetanyahuInIndia pic.twitter.com/6WrK2bmYX2

I have always had a deep regard for Israel and its people. I visited Israel in 2006 as CM of Gujarat. Last year in July, I visited Israel, 1st such visit from India. I experienced the remarkable spirit of innovation, enterprise and perseverance that drives Israel: PM Modi pic.twitter.com/fc2s9mlGjw

India’s development agenda is huge. It presents a vast economic opportunity for Israeli companies. I invite more & more Israeli people, businesses & companies to come & work in India. Along with Govt & people, the business community of India too is keen to join hands: PM Modi pic.twitter.com/gScHdXMHN4

#WATCH "My friend Narendra if anytime you want to do a Yoga class with me,it is a big stretch but I will be there": PM #BenjaminNetanyahu to PM Modi pic.twitter.com/RUjVtNFckf

My friend Narendra if anytime you want to do a Yoga class with me, you are welcome, thought it will be a bit of a stretch: PM Netanyahu

We remember the horrific savagery in Mumbai (26/11 attacks), we will never give in and will fight back: Israeli PM Netanyahu

It (PM Modi's visit to Israel) excited all Israelis and of course many Israelis of Indian descent and origin came. Well I thought I was in a rock concert. But it was a historic event: Israeli PM Netanyahu

Jews in India have never witnessed anti-semitism like in some other countries, this is a tribute to India's great civilization, tolerance and democracy: PM Netanyahu

You are a revolutionary leader, you have revolutionised India and catapulted this state to the future. Your visit to Israel was groundbreaking as it was the first time an Indian leader visited: PM Netanyahu to PM Modi

You are a revolutionary leader, you have revolutionized India and catapulting this state to the future, your visit to Israel was groundbreaking as it was the first time an Indian leader visited: PM #Netanyahu to PM Modi #NetanyahuInIndia pic.twitter.com/zs4xbuajwg

Last year in July, I carried the greetings and friendship of 1.25 billion Indians during my momentous journey to Israel. In return, I was overwhelmed by the generous affection and warmth of the Israeli people led by my friend Bibi (Benjamin Netanyahu): PM Modi

We will strengthen existing pillars of cooperation in areas that touch the lives of our peoples. These are agriculture, science and technology and security.We exchanged views on scaling up the Centers of Excellence that have been a main-stay of agricultural cooperation: PM Modi

In defence, I have invited Israeli companies to take advantage of the liberalised FDI regime to make more in India with our companies: PM Modi

We have imparted our shared impatience to the implementation of our earlier decisions. The results are already visible on the ground. Our discussions today were marked by convergence to accelerate our engagement and to scale up our partnership: PM Modi

My good friend welcome to India, your visit marks a special beginning to our new year calendar: PM Narendra Modi to Netanyahu

Exchange of MoUs between India and Israel including on cyber cooperation, science and technology, oil and gas, film cooperation, homeopathy and alternative medicine

Co-operation in medicine and technology announced

This is a dawn of a new era in friendship between India and Israel: Israeli PM Netanyahu

It began with PM Modi's historic visit to Israel that created tremendous enthusiasm, it continues with my visit here which I must say is deeply moving for me, my wife and the people of Israel. Heralds a flourishing partnership to bring prosperity, peace and progress for our people: Israeli PM Netanhayu

This is the dawn of the New Year: Israeli PM Netanyahu

PM Netanyahu inspects the guard of honour at the Rashtrapati Bhawan

Israeli Prime Minister Benjamin Netanyahu, who is on a six-day visit to India, arrived in Delhi yesterday accompanied by his wife Sara Netanyahu and a 130-member business delegation.

Netanyahu, who is the second Israeli PM to visit India after Ariel Sharon in 2003, wrote on Twitter yesterday that his "historic visit" was a "great blessing" for Israel.

Yesterday, PM Modi hosted a private dinner for his Israeli counterpart and his wife.

Netanyahu will be given a ceremonial reception at 10 am at the Rashtrapati Bhawan which will be followed by the wreath laying at the memorial of Mahatma Gandhi.

The primary focus will be on "innovation" -- covering trade, economy, agriculture, water management etc. Discussion on defence and security components are also expected to happen as they have been a strong part of India-Israel relations for a while.

Also Read - One negative UN vote will not affect ties with India: Netanyahu on Jerusalem

The two sides will sign agreements and also issue a joint press statement at Hyderabad House around 1 pm.

The Israeli Prime Minister will pay a visit to President Ram Nath Kovind later in the day.