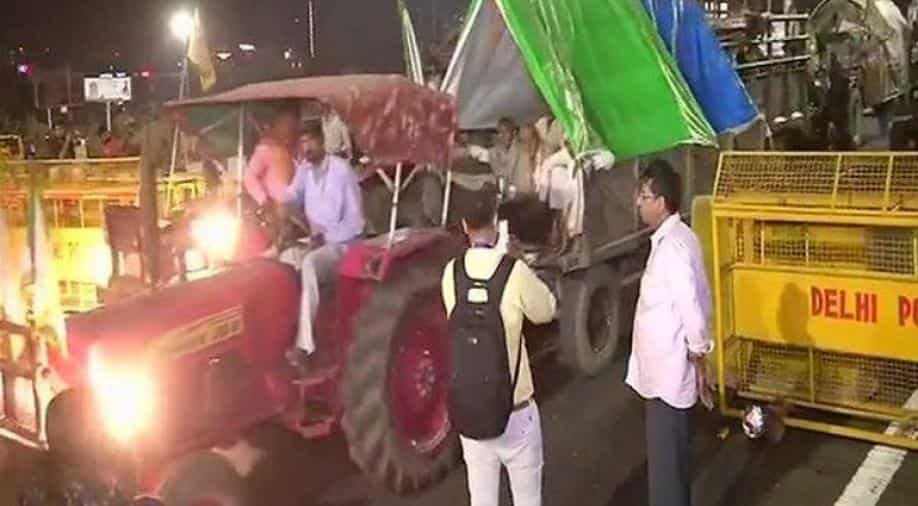 The protest march came to an end after the protesting farmers reached Kisan Ghat, the memorial of Chaudhary Charan Singh, a renowned farmer leader on late Tuesday night. Photograph:( ANI )

After police ceased them at Delhi outskirt, irate agriculturists attempted to break the obstructions and raised trademarks constraining the police to utilize twirly doos, nerve gas shells and water guns to scatter them.

The 'Kisan Kranti Padyatra' — which began on September 23 — ended at Kisan Ghat in the national capital on Wednesday. Kisan Ghat is the memorial to Chaudhary Charan Singh.

The farmers were allowed to enter the national capital around midnight Tuesday after police unsealed the border between Delhi and Uttar Pradesh.

Violence had broken out at Delhi's Ghazipur border earlier on Tuesday with police firing tear gas and water cannons at the farmers assembled there. News reports said as many as 30,000 farmers had marched on Delhi.

The farmers had a charter of 15 demands including loan waivers and fair prices for their crops, which they want implemented without delay.

Their demands also include revoking the ban on 10-year-old tractors in the National Capital Region (NCR), reduction in electricity tariffs, implementation of the recommendations of the Swaminathan Commission, and the payment of sugarcane arrears, among others.

"The 'Kisan Kranti Padyatra' that started on September 23 had to end at Kisan Ghat. Since Delhi Police did not allow us to enter, we protested. Our aim was to finish the Yatra, which we have done now. Now we will go back to our villages," Bharatiya Kisan Union president Naresh Tikait said.

"The farmers remained unfazed despite all the hardships. We have been marching for 12 days now, farmers are tired as well. We will continue to demand our rights to the government but for now we are ending the march," Tikait added.

After police had stopped them on the outskirts of Delhi, the farmers had attempted to break through to Delhi. The police hit back with tear gas and water cannons.

News reports said 14 people were hurt in the clashes.

In the wake of the agitation, the Centre accepted most of the demands of the farmers following consultations with top leaders of the Bhartiya Kisan Union (BKU) - the umbrella organisation under which thousands of farmers have been staging a protest to press for their demands.

All schools and colleges in Ghaziabad is scheduled to remain closed on Wednesday as a preventive measure in view of the protest.