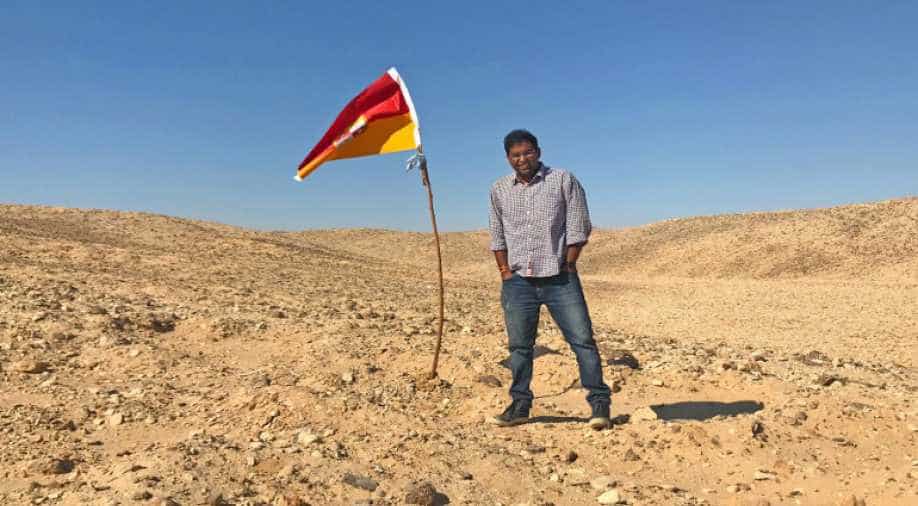 Bir Tawil is a land along the border between Egypt and Sudan, which is uninhabited and claimed by neither country.? Photograph:( Facebook )

Suyash Dixit, a computer coder from Indore has declared himself king of the kingdom of Dixit in Bir Tawil.

Bir Tawil is a land along the border between Egypt and Sudan, which is uninhabited and claimed by neither country.

(Also Read - Will give citizenship to anyone who works for betterment of humanity: King Dixit to WION)

Its existence is the result of a border drawn up by the British at the end of the 19th century.

Dixit has also created a website to invite others to apply for citizenship.

Dixit planned his journey over two nights in Egypt and he convinced a local driver to take him to the remote outpost, Suyash said in his facebook post.

The route that goes to the territory is under Egyptian military and is an area of terrorists because of that military have 'shoot at sight' order and permission is also needed to even enter the route that takes to Bir Tawil.

After reaching Bir Tawil Suyash has planted a flag and seeds in the desert to establish his claim.

“Following the early civilization ethics and rules, if you want to claim a land then you need to grow crops on it,” Dixit said. “I have added a seed and poured some water on it today. It is mine.”

Mulitple individuals and organizations have attempted to claim Bir Tawil. However, none have been taken seriously by the international community.

In 2011, Jack Schenker claimed the territory by planting a multiple colour flag.

In 2014, a Virginia father also travelled to Bir Tawil with the aim of making his daughter a princess of the "Kingdom of North Sudan" it is not clear that he has pursued his claim of ownership or otherwise continued his involvement in the tract of land.

No claims have been recognised, officially or otherwise by any government or international organization.

By both claims, we can guess that Dixit will not have an easy time defending his claim over the territory.