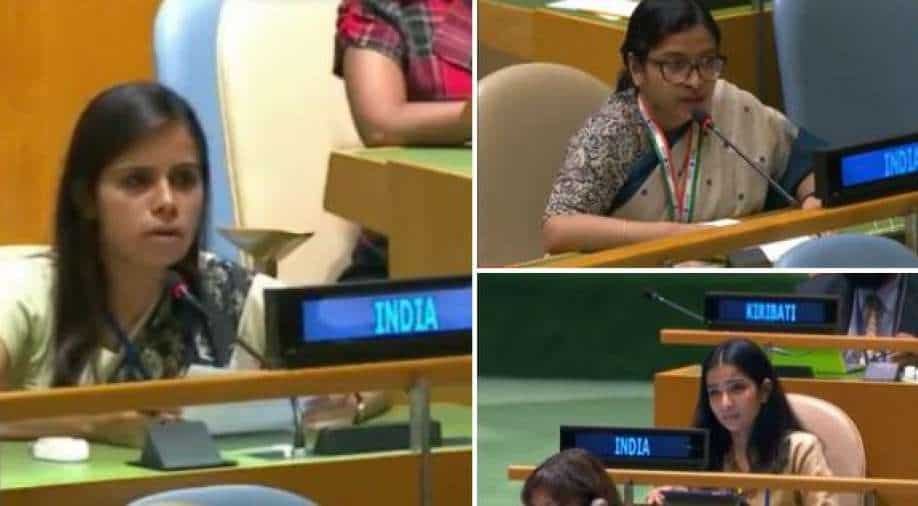 India's diplomat Sneha Dubey is not the first to slam Pakistan at the UNGA, the country has been fielding young women diplomats to blunt Pakistan's Kashmir agenda for the past few years.

In 2016, India's then first secretary at the Indian mission in the UN, Eenam Gambhir delivered her Right of Reply to Pakistan's former Prime Minister Nawaz Sharif at the UN General Assembly(UNGA).

In fact, after Sneha's Dubey's speech, Twitter exploded with pictures of speeches made earlier by Gambhir and another young diplomat Vidisha Maitra.

Eenam Gambhir, Vidisha Maitra, Sneha Dubey. !!! Indian diplomats at UN .Quite a handful for porkistan . !!!Interestingly the lionesses are in sarees too:) pic.twitter.com/xCgknFVTRx

Gambhir openly attacked Pakistan while asserting that the "land of Taxila" was now hosting the "Ivy League of terrorism" while saying that the country attracts terror "aspirants and apprentices"  from across the world.

Gambhir kept up the tempo as she took on former Pak PM Shahid Khaqan Abbasi in 2017 pointing out that the country was "synonymous with terror" while raising the issue of Pakistan hosting terrorist Hafiz Mohammed Saeed.

In a wide-ranging and powerful speech, Maitra reminded the delegates about Pakistan's genocide in Bangladesh in 1971 and the role played by Lt. General Niazi.

Pakistan PM Imran Khan who has repeatedly used the UN floor to raise the Kashmir issue had attacked India while whipping up nuclear war hysteria.

Maitra said the Pakistan prime minister had "monopolised the entire value chain of the industry of terrorism" as her remarks reverberated across the UN.

"For someone who was once a cricketer and believed in the gentleman’s game, today’s speech bordered on the crudeness of the variety that is reminiscent of the guns of Darra Adam Khel," the Indian diplomat said.