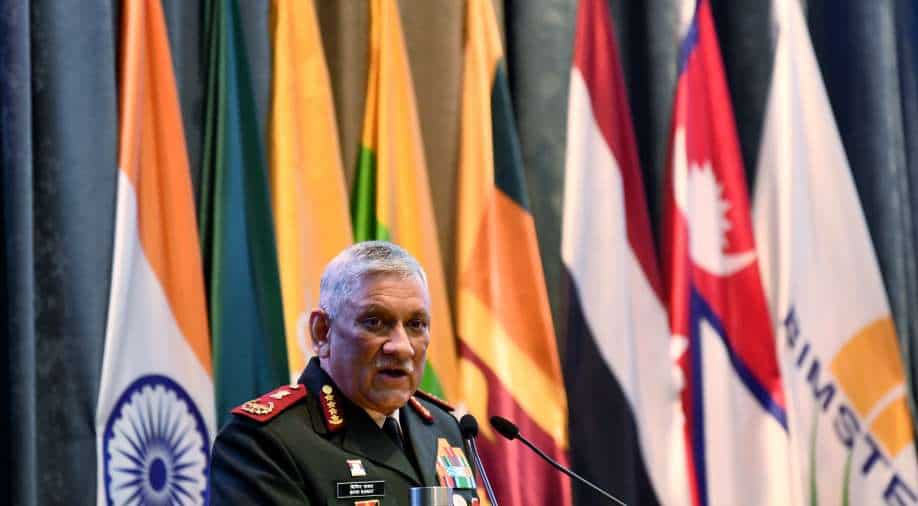 The first CDS was a veteran of counterinsurgency warfare and served in some of the most difficult terrains of India, including the northern and eastern commands.

Bipin Laxman Singh Rawat, who died in a helicopter crash on Wednesday, was appointed as India’s first Chief of Defence Staff (CDS) on December 30, 2019. The former Indian Army Chief assumed office from January 1, 2020.

Gen Bipin Rawat, his wife Madhulika Rawat and 11 other persons on board the IAF chopper died in the accident in Tamil Nadu.

General Rawat had taken over the reins of the Indian Army from General Dalbir Singh Suhag on December 17, 2016, as the 27th Chief of Army Staff (COAS).

The first CDS was a veteran of counterinsurgency warfare and served in some of the most difficult terrains of India, including the northern and eastern commands.

He has also been part of the United Nations Peacekeeping Force and has commanded a multinational brigade in the Democratic Republic of Congo.

He was instrumental in reducing the militancy in the Northeast, with one of the highlights of his career being the 2015 cross-border operation into Myanmar in which the Indian Army successfully responded to an ambush by NSCN-K militants.

The mission was conducted from the operation command of Dimapur-based III Corps under Rawat's supervision. He was also part of the planning for the 2016 surgical strikes, in which the Indian Army went across the Line of Control into Pakistan-occupied Kashmir.

Rawat, it was reported, was monitoring the developments from South Block in New Delhi.

Notably, in 2015, General Rawat miraculously survived a single engine helicopter crash, minutes after it took off from Nagaland.

General Rawat has been a part of many international bilateral visits to places such as Nepal, Bhutan, Myanmar, Russia and the United States.
He is also an honorary General in the Nepalese Army.

Also read | IAF confirms demise of CDS Gen Bipin Rawat, his wife, 11 others in chopper crash: Here's what we know so far

Rawat was born in Pauri district in the northern state of Uttarakhand. His family had been serving the Indian Army for multiple generations. His father Laxman Singh Rawat served as the Lieutenant General in the army.

The 63-year-old was the alumnus of the National Defence Academy, Khadakwasla, and the Indian Military Academy, Dehradun, where he was awarded the 'Sword of Honour'. He also attended the Command and General Staff Course at Fort Leavenworth, USA.

In December 1978, Rawat was commissioned into the Indian Army in the same unit as his father, the fifth battalion of 11 Gorkha Rifles.
An academically inclined general, Rawat has authored numerous articles on national security and leadership, which have been published in various journals and publications.

He was awarded M Phil in Defence Studies from Madras University.

He has a diploma in Management and another diploma in Computer Studies. He has also completed his research on military media strategic studies and was awarded Doctorate of Philosophy (PhD) from Chaudhary Charan Singh University, Meerut in 2011.

Under the leadership of Rawat, the Indian Army has taken some of the most stringent steps against Pakistan. It was under his tenure that the army provided stronger defences along the border with Pakistan, when the Indian Air Force carried out the Balakot strikes in February 2019.

Incidentally, he has also ensured strong retaliation to unprovoked ceasefire violations by the Pakistan Army along the Line of Control.
Against China:

Besides Pakistan, he has also managed military affairs along the border with China, following the Doklam standoff that went on for over two months. He has also facilitated better relations between the armies of India and China through regular border meetings, interactions and joint exercises.

As an Army Chief, General Rawat stood up to Chinese PLA at Doklam plateau on India-Bhutan-China tri-junction for 73 days in 2017.

He was instrumental in reducing the militancy in the Northeast, with one of the highlights of his career being the 2015 cross-border operation into Myanmar in which the Indian Army successfully responded to an ambush by NSCN-K militants.

The mission was conducted from the operation command of Dimapur-based III Corps under Rawat's supervision.

He was also part of the planning for the 2016 surgical strikes, in which the Indian Army went across the Line of Control into Pakistan-occupied Kashmir.
Rawat other achievement as Army Chief:

Rawat has also played a key role in shaping the army. He was fundamental in restructuring the army to cut administrative flab, reduce duplicity and increase combat potential.

He has also ensured that the man behind the machine remains important, arming them with new assault rifles procured from the US. He has also been critical in the modernisation of the army.

However, his tenure has also been marred with controversies. Under his tenure, the army accepted the government’s decision to tax disability pension, generating anger among disabled veterans. It was under him that cantonment roads were opened to civilians, raising questions on security by the military fraternity.

When Bipin Rawat took charge of the United Nations’ North Kivu Brigade in the Democratic Republic of Congo in 2008, things weren’t going too well for the world’s costliest peacekeeping mission, known by its French acronym MONUC.

The locals were contemptuous of UN peacekeepers, questioning what difference they had made in their lives and accusing the mission of doing little to protect them. Angry crowds would often hurl stones at UN vehicles on the streets of Goma, the capital of North Kivu and where the Indian brigade is based.

General Rawat was a brigadier when he was sent to the Congo in August 2008 to command the Indian Army’s, then as now, largest deployment on foreign soil. He hit the ground running and quickly grasped the reason the peacekeepers were struggling to contain the crisis in the Congo, formerly known as Zaire.

Rawat reworked the velvet-glove strategy to an iron fist within a month of his arrival, frequently authorising the use of attack helicopters to strafe positions held by rebel groups responsible for civilian deaths, recruiting child soldiers and displacing millions of people.

As the Congo’s internal conflict raged, he ordered the deployment of infantry combat vehicles rigged with machine guns and cannons to crush rebels and enforce peace in flashpoints such as Tonga, Kanyabayonga, Rutshuru and Bunagana.

The general is credited with providing dynamic leadership under the UN banner. The Indian peacekeepers switched their approach from a velvet glove to an iron fist under his leadership.