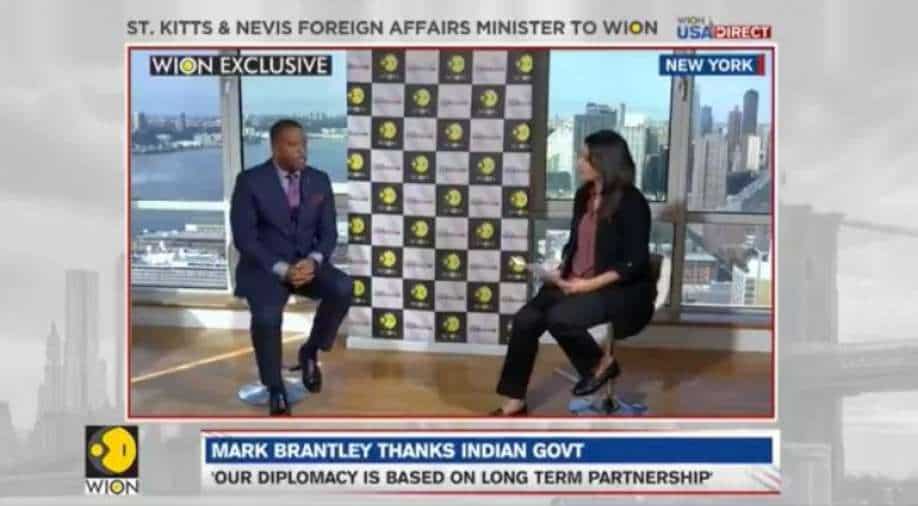 In an interview with WION’s Executive Editor Palki Sharma Upadhyay, Brantley said he was able to visit New York after being fully inoculated with AstraZeneca vaccine, which was made by the Serum Institute in India.

“In the height of the pandemic, even as India itself was suffering the ravages of COVID-19, we were very impressed that the PM came forward and offered us vaccines.

"The vaccines allowed us in St Kitts and Nevis and most of the Caribbean to commence the vaccination process. It is a matter of tremendous merit,” said the minister.

“For this, we congratulate PM Modi, his government and people of India. Even as we were waiting for COVAX to deliver, the Indian government bilaterally was able to provide vaccines to us and our people.”

St Kitts and Nevis is a far-off Caribbean Island, which was badly affected by COVID-19 pandemic.

Both India and St Kitts and Nevis share a long history, as the first Indians there arrived in the country in 19th century mostly as indentured labour during the colonial era.

Although the relations established between India and St Kitts and Nevis go back a long way, the trade between the two countries has not really taken off. As of 2016, the bilateral trade was just about USD 2.36 billion.

“A lot of it has to do with geographical distance between the countries and absence of effective transportation both by sea and air," Brantley said.

"We are in that part of the world where trade has to go through two or more countries. It adds to the cost. Transportation links globally is always a problem. The more stops goods make before they arrive to us, the more difficult, and costly it becomes."

The minister said ties between the two countries goes well beyond trade, adding that relationship with India is one that he cherishes the most.

“I would like to thank government and people of India and Prime Minister Narendra Modi as he was very generous. He came here in UN in 2019 and had a meeting with Caribbean leaders and expressed interest in working more closely with the Caribbean countries,” said the leader.

The Caribbean region has a very long history with India. St Kitts and Nevis as well as Trinidad and Tobago, and Guyana have significant Indian populations.