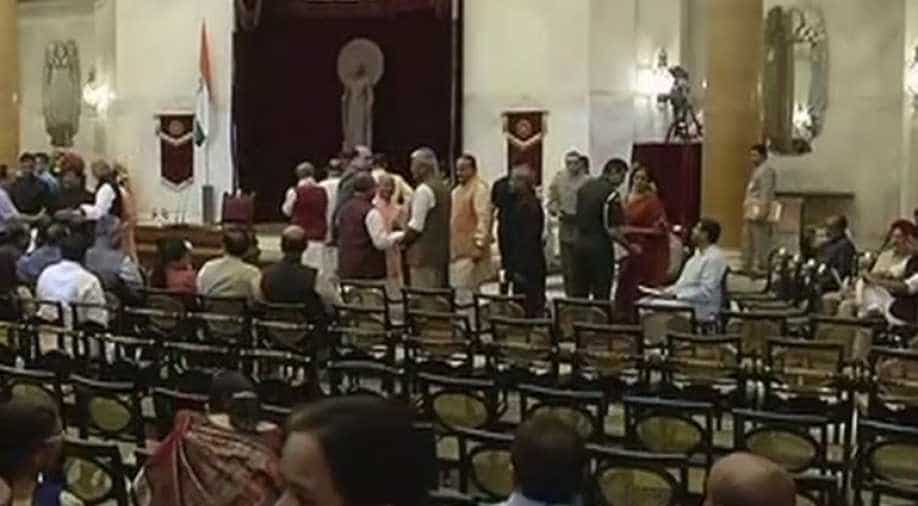 Prime Minister Narendra Modi's cabinet is set for a revamp as nine new faces will be sworn-in today. Photograph: ANI

R K Singh, who is a BJP lawmaker from Arrah in Bihar and has served as union home secretary, takes oath as minister.

Union minister Mukhtar Abbas Naqvi is the fourth member of the council of minister who has been promoted to Cabinet rank.

Prime Minister Narendra Modi arrives for the swearing-in ceremony at the Rashtrapati Bhavan. The Prime Minister has recast his council of ministers with a vision to deliver on the promise of a "New India".

Union minister for power, coal, new and renewable Energy with independent charge Piyush Goyal is seen embracing BJP lawmaker from Gwalior Narendra Singh Tomar. Also seen in the frame is Satyapal Singh, a BJP lawmaker and former top cop of Mumbai. Satyapal is one of the nine new ministers to be sworn-in today.

Along with the induction of new faces in the Union Council of Ministers, some of the ministers are expected to be promoted. With railway minister Suresh Prabhu offering to resign in the wake of a string of train mishaps and Arun Jaitley holding an additional charge of defence ministry after Manohar Parrikar became chief minister of Goa, the question over who will be allocated which portfolio is still uncertain.

The Prime Minister has chosen four former civil servants to be included in his Council of Ministers. Among them is K J Alphons who is popularly known as Delhi's demolition man as he led the encroachment drive during his stint as Delhi Development Authority commissioner.

The Janata Dal (United) which formed the government in Bihar with the support of BJP and joined the BJP-led NDA is reportedly not being offered any berths in the Union Council of Ministers. Bihar chief minister Nitish Kumar said that he came to know about the reshuffle through media.

Our National President had already made it clear, so no question of me or anyone from JDU joining cabinet: VN Singh,JDU #cabinetreshuffle pic.twitter.com/iyN86d1G0n

Former union home secretary and BJP lawmaker R K Singh expressed happiness over his inclusion in the council of ministers.

I thank the PM for expressing confidence in my ability. Portfolio has not been decided yet: RK Singh,BJP #cabinetreshuffle pic.twitter.com/dEyO5T24pD

The Union Cabinet is set to undergo a reshuffle as nine new ministers will be inducted today in a ceremony currently underway at Rashtrapati Bhavan.

Among the new faces, four are former bureaucrats.

Those who will be sworn-in today are Shiv Pratap Shukla from UP, Ashwini Kumar Choubey and RK Singh from Bihar, Virendra Kumar from Madhya Pradesh, Anantkumar Hedge from Karnataka, the former IFS officer Hardeep Singh Puri, Gajendra Singh Shekhawat from Rajasthan, and Satya Pal Singh and Alphons Kannanthaman from Kerala.