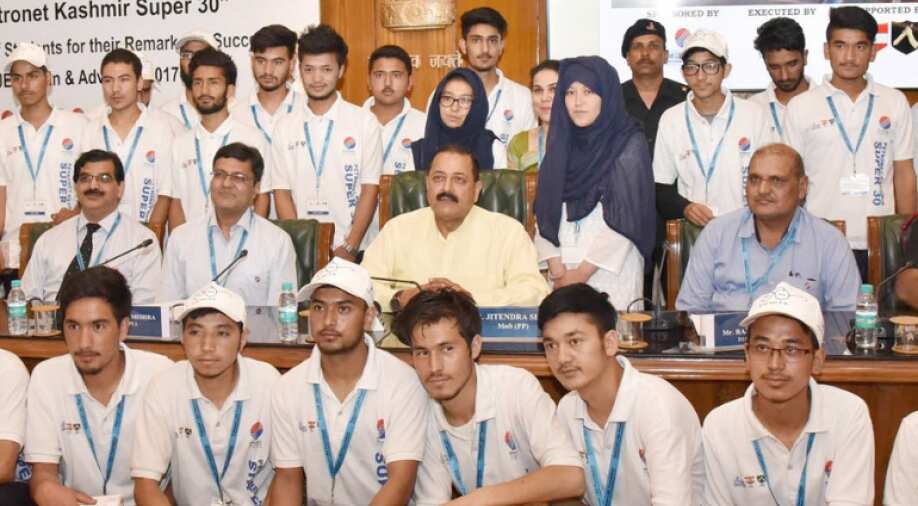 Union Minister Dr Jitendra Singh in a group photograph with the students from Jammu and Kashmir (supported by ‘Kashmir Super 30’ Project) who have qualified for the JEE (Main & Advance), 2017-18, in New Delhi. Photograph:( Twitter )

As many as 32 out of the 50 students of the Indian Army's Kashmir Super-50 free engineering coaching institute in Srinagar have cracked this year’s IIT-JEE (Advanced), the results of which were announced on Sunday.

The outgoing batch is the fifth batch of Kashmir Super 50 which had 45 boys based in Srinagar and five girl students based in Noida.

Project 'Kashmir Super 50' has been one of the most successful projects undertaken by the Indian Army in the valley and has directly impacted the lives of a number of youths in J&K by providing them with the right guidance and opportunity to make a career for themselves.

The project has equally helped the families of these youths in their growth and prosperity. It is a major initiative towards bringing normalcy in the valley.

A group of 30 students, part of Kashmir Super 50 visited New Delhi and interacted with General Bipin Rawat, Chief of the Army Staff on 12 Jun 18.

The General shared his experiences while serving in these areas, with the students and motivated them to work hard & contribute actively to the nation-building process.

Chief of Army Staff, General Bipin Rawat interacts with the students from J&K (supported by ‘Kashmir Super 30’ Project) who have qualified for the JEE (Main & Advance), 2017-18, in New Delhi pic.twitter.com/01ByEftqTM