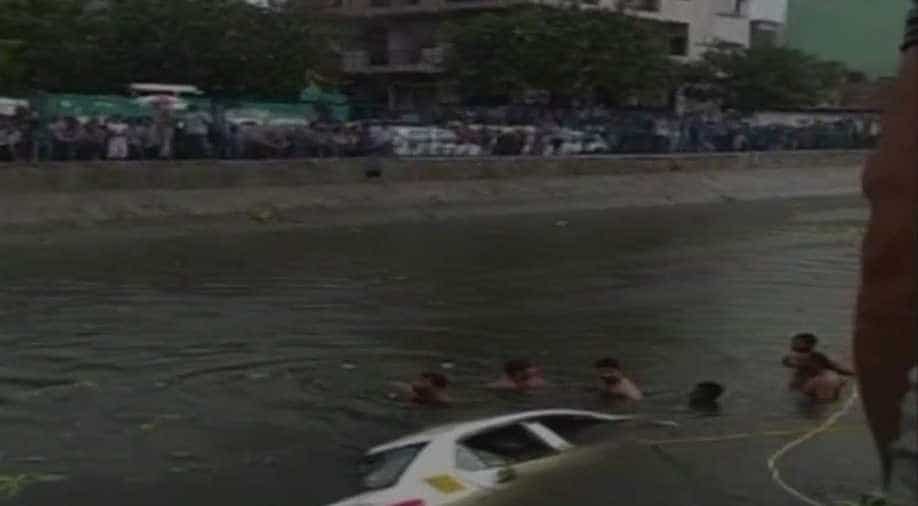 Rescue operations are underway. Five people have been rescued so far. Photograph:( ANI )

Two people died and four were injured when a massive garbage dump collapsed at a landfill site collapsed in East Delhi's Ghazipur on Friday. A few cars, an autorickshaw and a two-wheeler fell into the adjoining Kondli canal resulting in the death of two persons.

The 150 -feet garbage heap which fell onto the road at about 2:30pm, pushing vehicles off the road into the canal.

Two bodies have been recovered from Kondli canal, the Delhi Police confirmed.

A report in Zee News said that two two-wheelers had fallen into the canal leading to the death of the riders of both the vehicles.

A report in NDTV said that one car, an auto-rickshaw and a two-wheeler were pushed into the canal and that a two-year-old girl died after being thrown off the scooter.

At least five vehicles fell into the canal which flows into the landfill site, reports said.

Five people have been rescued with the help of ropes and divers.

Rescue operations are underway since the past few hours. A team of the National Disaster Response Force (NDRF) has been aiding in the rescue operations.

The Ghazipur landfill is one of the Indian capital three garbage dumps and its oldest.

East Delhi Municipal Corporation Mayor Neema Bhagat has blamed the Delhi government for the "poor maintenance" of the landfill.